The Ursa Minor Constellation and the Little Dipper

One of the most famous stars ever is located in the Ursa Minor constellation. It has been responsible for showing us true north and helping people of the sea for centuries. Do you know which star we are talking about?

Learn about the Ursa Minor star constellation and its mythology in this complete guide!

The Mythology of the Ursa Minor Constellation

The Ursa Minor constellation is usually associated with two different myths. In the first story, Ursa Minor is a representation of Ida, a nymph who cared for Zeus when he was born. The tale is interesting because Zeus’s own father wanted to kill Zeus by eating him, just like he did to his other children. He was doing this because a prophet told him his son would overthrow him. Zeus’s mother tricked his father into eating a stone instead – and Zeus did eventually overthrow his gobbling father.

The other myth associated with Ursa Minor is a tale of lovers, betrayal and envy. In this myth, Ursa Minor represents Arcas, the illegitimate child of Zeus and Callisto. In the two myth variations, Zeus’s wife or Callisto’s lover, Artemis, turned Callisto into a bear because of the deceit. Then, depending on which myth you continue to follow, Zeus placed Arcas and the bear into the sky to stop them fighting each other, or to protect them from hunters and people wanting to capture them. Some suggest Arcas is now represented by the Ursa Minor constellation, while others tie Arcas with the Boötles constellation. 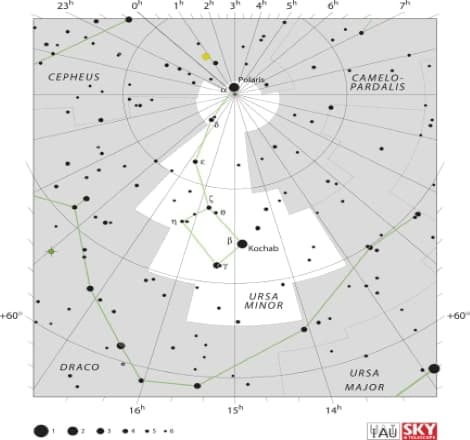 If we join the dots of a constellation together in a specific way, we get an outline of a shape which can then be interpreted to resemble an image. Most of the time Ursa Minor is said to resemble a small bear. This continues the symbolism of Ursa Major, which also resembles a bear of the sky, albeit much larger. The constellation is surrounded by the Draco constellation, which depicts a dragon that surrounds the little bear. These are the images our ancient ancestors saw in the sky and connected them with myths. But we have to be prepared to use our imagination to some extent to see what they once saw.

The Brightest Star in Ursa Minor: The North Pole Star

The brightest star in Ursa Minor is named Polaris. It is incredibly far from Earth, over 430 light years away. There is a secret tip to help you find Polaris. If you know where the bright stars are on the famous big dipper asterism in Ursa Major, namely Merak and Dubhe, trace upwards from these until you come to another exceptionally bright star. Now you are looking at Polaris!

It is one of the closest stars to the pole and is essential for many voyagers and for sea navigation. Those who are familiar with the sea and boating may know it as the sea star or Stella Maris.

Where Is the Ursa Minor Constellation in the Sky?

Ursa Minor is in the Northern Hemisphere, specifically in the third quadrant and visible between latitudes of +90 and -10 degrees. Unlike Ursa Major which is one of the biggest constellations in the sky, Ursa Minor is a small constellation. It covers just 256 square degrees. But don’t let its size put you off looking for Ursa Minor in the sky. Its little dipper asterism will help you find it (more on the little dipper can be found in the facts section at the end of this guide).

It is part of the Ursa Major constellation family, including Ursa Major, Boötes, Leo Minor, Draco, Coma Berenices and others. Its closest neighbours are Draco, Cepheus and Camelopardalis.

What Month Can I See Ursa Minor from the UK?

The Ursa Minor constellation is visible throughout the year from the UK. This means getting a stargazing trip organised to see the little dipper can be done at any time for any occasion – made even better if you name a star after one of the gang!

But if you want to maximise your chances of finding Ursa Minor, we recommend looking for the little bear in the sky in June. This means you can turn your hunt for Ursa Minor into a summer camping trip with friends. Ursa Major is also visible throughout the year from the UK – so you can tick two cool constellations off your stargazing bucket list with one trip!

What Is the Distance Between Earth and Ursa Minor?

Trick question! Do you know why?

There cannot be one distance between the Earth and any constellation because constellations are made up of many stars, and not all stars will be the same or even a very similar distance away. For example, Ursa Minor includes the Polaris star, which is 434 light years from Earth, while another of Ursa Minor’s stars called Yildun is less than 200 light years from us.

Next time someone asks you how far any constellation is from Earth, you can cleverly correct them and explain why it is a little more complex than that!

For as much as we know, space doesn’t end. And our Ursa Minor facts don’t end now either. Here are three more facts to get your bear claws into: