Find the Cepheus Constellation in the UK Skies!

Check out this guide to uncover the meaning of the Cepheus constellation and where it is in the sky. There is good news if you are looking for Cepheus from the UK. Read on to uncover more!

In Greek mythology, Cepheus is known as the King of Ethiopia and was a descendant of Io, one of Zeus's many lovers. Because of his connection to Zeus, it was he who placed Cepheus in the sky as the Cepheus constellation. The most famous myth of Cepheus involves his wife and her vanity. He was married to Cassiopeia who was boastful about her appearance suggesting she was more beautiful than the sea nymphs. Thus, the sea nymphs were angry and their sea god sent a monster after Cepheus and his family. This monster is represented by the Cetus constellation.

Cepheus asked an oracle for help who told him that to make up for his wife's vanity, he had to sacrifice his daughter, Andromeda. He reluctantly did this by chaining her to a rock ready for the monster to find. But Andromeda was saved by a man called Perseus, who went on to marry Andromeda. At the wedding ceremony, one of Andromeda's suiters claimed that she was supposed to become his wife. Cepheus rejected his claim and a fight broke out. Perseus defeated the other man with the head of Medusa which turned onlookers into stone, but in the midst of the battle, Cepheus and his wife were also turned into stone. 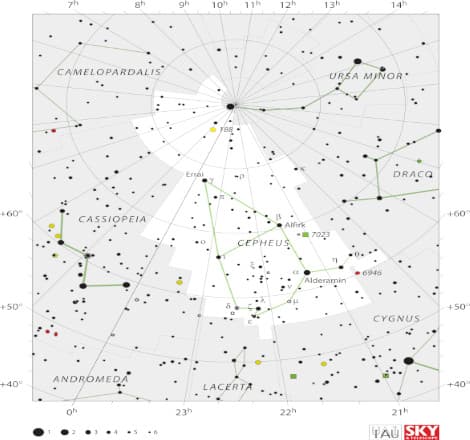 The Cepheus constellation is said to look like the king himself. But how do a group of stars look like him? First you must join the stars up in a specific way and imagine lines between each star. Once that has been done, you need to use your imagination to fill in the gaps and details. This means constellations rarely look like what you may be expecting. However, it is just as interesting to look for the same star imagery that other peoples did hundreds of years ago.

What Is the Brightest Star of Cepheus?

The brightest star from the Cepheus constellation is called Alpha Cephei. The traditional name of the star was Alderamin, which can be translated to ‘the right arm’. There are lots of cool facts about Alpha Cephei. It is just 49 light years from Earth, and it will never set below the horizon when looking at it from the UK, northern parts of Asian, many northern US cities and Canada. Other major stars of the Cepheus constellation include:

Where Is the Cepheus Star Constellation?

The Cepheus constellation is situated within the Northern Hemisphere's fourth quadrant (NQ4). It covers 588 square degrees of this area of sky, putting it in the top 30 largest constellations.

When Is the Best Time to See Cepheus from the UK?

Some constellations are only visible part of the year from the UK – but Cepheus isn't one of them. The Cepheus star constellation is visible throughout the whole year if you are in the UK, but you still need to make finding it easier for yourself by getting away from light pollution and picking a clear night to go stargazing.

Some people suggest the best time to go looking is in November. Grab your hat and scarf and get into the UK wilderness during November to make finding Cepheus in the sky even easier.

How Far Is Cepheus from Earth?

If you are an experienced stargazer or even a scientist of the sky, we know you just tutted at his question. But newcomers to stargazing or those who are just taking an interest in the stars may not realise that there is no answer to this question. So, why is that?

We cannot state the distance between the Earth and a constellation because the stars within any constellation are not the same distance away. Some are close and some are far – but none are very close at all. For example, the brightest star of Cepheus is Alpha Cephei which is fewer than 50 light years away. But other major stars, such as Beta Cephei, are over 500 light years from Earth

Extra Facts about the Cepheus Constellatio

Cepheus is always interesting and one of the most well-known constellations outside of the zodiac constellations. That is probably because of the fascinating mythology behind it. Here are some more cool facts about Cepheus:

Cepheus may not be one of the biggest heroes of the sky, but you could be a big hero in the eyes of a friend, family member or partner. How, you ask? If you named a star after them.

Learn how to name a star after someone you love at Star Name Registry!