It is located in one of the most interesting constellations called Ursa Major. You can learn lots about the huge Ursa Major constellation in this friendly guide.

The Mythology Behind Ursa Major

Ursa Major features in lots of cultures and the majority of them make connections to a bear image. One of the most famous comes from Greek mythology. In this myth, Callisto had sworn his love exclusively to Artemis. However, Zeus fell in love with Callisto and they had a son named Arcas. Zeus’s wife, Hera, was furious that she had been deceived by the pair and turned Callisto into a bear.

The bear wandered the forest for years trying to escape hunters. The bear then bumped into her son, Arcas, in the forest and made him scared. So, he drew his spear ready for battle. But Zeus was watching the events unfold and sent a whirlwind to prevent the mother and son – unknowingly – from fighting. Zeus sent both of them to the sky where they were to become constellations. Callisto the bear became Ursa Major and Arcas was made into Boötes, although some suggest Arcas is Ursa Minor.

A slightly different version of this myth suggests that it was not Hera but Artemis who turned Callisto into the bear. Furthermore, the bear and Arcas went on the run but were captured. Zeus saved them by placing them in the sky as constellations to keep them protected. 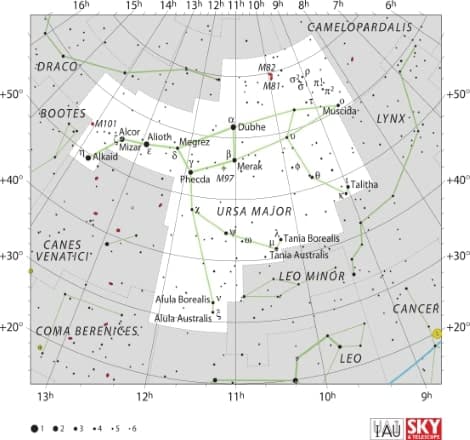 A comprehensive guide to the arrangement or Ursa Major’s stars can be found on this Ursa Major guide!

Which Is the Brightest Star in Ursa Major?

Where Is the Ursa Major Constellation?

Ursa Major is the third biggest constellation and covers 1280 square degrees. It is situated in the Northern Hemisphere’s second quadrant (NQ2), making it visible between latitudes of +90 and -30 degrees.

There are many other star constellations close to Ursa Major. These are Draco, Leo and Leo Minor, Camelopardalis, Canes Venatici and Boötes which is argued by some people to be a representation of the bear’s son, Arcas.

Can I See Ursa Major All Year from the UK?

Despite Ursa Major sitting in the UK skies for the whole year, there is still a better time to go looking. It is recommended to search for Ursa Major in April at 9pm. But if you missed it in April, don’t let this stop you for searching for Ursa Major at any other time in the UK.

We cannot say the exact distance between Earth and the Ursa Major constellation because there is not one measurement. All the stars in Ursa Major are different distances away, so the constellation is closer and further away from Earth at different points. However, many of Ursa Major’s main stars are much closer to each other than most other constellation stars.

A good example is by looking at some stars from the big dipper. Earlier we told you that Alioth is 81 light years from us. Merak is very close to Alioth around 80 light years away– and so are some of the other big dipper stars - but Dubhe is much further away from Earth; it is over 100 light years away.

There is a really cool fact how the big dipper of Ursa Major was the subject of a well-known folk song and even guided slaves to freedom. Learn this interesting big dipper information and more cool Ursa Major facts below:

For more cool constellation guides, check back in with us at Star Name Registry soon.