From inspiring character names at Hogwarts to guarding golden apples, there are so many things to learn about the Draco constellation. You may already know it as the dragon constellation, but anything you don’t already we will have covered in this comprehensive constellation guide.

Get your scrolling finger at the ready and prepare to unearth Draco mythology, constellation facts about Draco’s stars and when to see Draco from the UK. Let’s go!

The tree of golden apples was a wedding gift to Hera after marrying Zeus. She asked the Hesperides to guard it for her but also placed Ladon beneath the tree to make sure the Hesperides would not touch the golden apples. Some variations of the myth have suggested that Ladon was not just a dragon but a half-woman-half-serpent creature with 100 heads.

As part of Heracles' 12 labours, he had to steal some of the golden apples and killed Ladon in the process. Hera was sad about the killing and placed Ladon in the sky in memory as the Draco constellation, more often referred to simply as the dragon constellation. 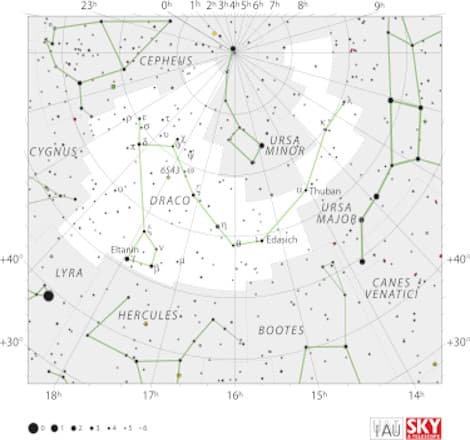 Looking at the Dragon Constellation

To see the dragon in the sky, you must first locate the constellation on a clear night. Help in achieving this can be found further down our guide. Once you have found the constellation, imaginary lines need to be drawn between each star in a certain way. This will give you an outline of the dragon’s form. However, this does not mean it will look like a dragon. To see the dragon that our ancestors saw, you will need to use some imagination to fill in the details. It also helps if you have an idea of what to look for. That is why we have provided an image of the Draco constellation below.

The Brightest Stars of the Draco Constellation

Location of Draco in the Sky

Other constellations close to the dragon constellation are Cepheus, Hercules, Boötes, Ursa Major and Minor, Lyra and Camelopardalis. If you already know where any of these constellations are located, it will help you find Draco on your next stargazing trip.

Can You See Draco from the UK All Year?

Yes! The dragon constellation is visible in the UK skies all year long. But just because it is visible all year doesn't mean there isn't a prime time to go looking. Experts recommend seeking out Draco in July, which also means you can take a summer stargazing camping trip to find the dragon.

Just remember to plan your search for Draco on a clear night and get away from as much light pollution as possible. These things will improve your view of the Draco constellation.

How Far Is the Draco Constellation from Us?

The Draco constellation is not a single distance from us. All of the bright stars mentioned earlier, and Draco's other stars are different distances away.

For example, the brightest star of the constellation, Gamma Draconis, is around 155 light years away. This distance will change in the future and more info can be found below in our Draco bonus facts section. However, another star in the same constellation, Beta Draconis, is almost 400 light years away. This goes to show that – if it were possible - we could go to some of the stars in Draco and then back to Earth before we would have time to reach some of the constellation’s other stars.

Bonus Facts About the Dragon Constellation

Want to hear another myth associated with the Draco constellation? What about a famous character that was named after these stars? You can find the best bonus facts below.

Ladon spent his life protecting a wedding present for Zeus and Hera. And Ladon can protect your own unique gift if you choose to name a star after someone in this area of the sky.

Naming a star after somebody is a fantastic gift and Star Name Registry can make it happen.

Learn about the process of naming a star on our site and find answers to common questions on our FAQ page.