The Cygnus Constellation: The Swan in the Sky

The Cygnus constellation is fascinating - but waiting to trip you up on your next pub quiz. Most people think there is only one famous asterism in Cygnus, when in fact there is 1.33. Confused? Let Star Name Registry give you all the details and facts about the Cygnus star constellation, right here!

In Latin, Cygnus means the swan, which is why the Cygnus constellation is sometimes referred to as the swan constellation. It is associated with multiple famous myths, but more often than not it is tied with the story of Queen Leda. Zeus seduced the queen after transforming himself into a swan, and she gave birth to two sets of twins. One set of twins were mortal, Clytemnestra and Castor, and one set was immortal, Hellen and Pollux. The latter twins are associated with the Gemini constellation.

Other myths associated with Cygnus all include a figure with the same name. There was a Cygnus that was killed by Hercules. Another one who was transformed into a swan after being killed in the Trojan War, and another myth about Cygnus, the friend of Phaeton. In the latter myth, the two friends were involved in a chariot accident and came tumbling to Earth. Cygnus saw his friend dead at the bottom of a river but could not retrieve his body. So, he bargained with Zeus to transform him into a swan to retrieve the body and give him the burial he deserved. However, as part of the deal, Cygnus was only going to live as long as a swan does.

Nevertheless, Zeus was moved by the sacrifice Cygnus made for his friend and put him in the sky as the Cygnus swan constellation. 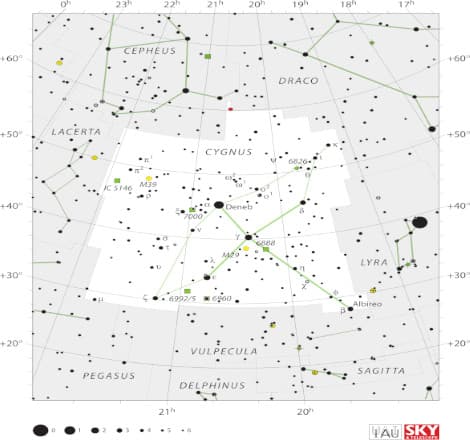 If you do go looking for the Cygnus constellation to see the swan in the sky, you will need to join the stars up with imaginary lines and then fill in some details using your imagination. The image of Cygnus below shows you what you can expect to see.

Star Names of the Cygnus Constellation

The brightest star in the Cygnus constellation is called Deneb. It is one of the stars furthest away from Earth that is also considered a main star within the modern constellations. Despite being over 1,500 light years from Earth, it is in the top 20 brightest stars we can see from Earth. It is only slightly fainter than Fomalhaut and has 60,000 times more luminosity than the Sun. Deneb is one of the stars within the northern cross; the others are:

The Cygnus constellation is located within the Northern hemisphere’s fourth quadrant, often shortened to NQ4. It is visible between latitudes of +90 and -40 degrees, which makes it visible to UK stargazers. There are some well-known constellations nearby to Cygnus, including Lyra, Cepheus who tied his daughter to a rock as a sacrifice and the Draco dragon constellation.

Cygnus covers just over 800 square degrees of the northern sky. This makes the constellation in the top 20 largest modern constellations!

Identify the Swan Constellation from the UK

Lots of people choose to go looking for the Cygnus constellation, even if they only want to see the northern cross asterism rather than the whole swan of the sky. You can do that from the UK, but you need to know when to go looking because Cygnus is not visible from the UK all year.

Experts suggest looking for the swan constellation in September. You will need to pick a clear night, and if you still have the last of the summer weather, you could make a family camping trip out of your stargazing expedition.

Distance Between Earth and the Swan

Prepare for your next astronomy quiz with some little-known bonus facts about the Cygnus constellation:

Looking for the northern cross and the famous swan constellation is always fun. But do you know how you can make it even better? Learn a little secret by visiting Star Name Registry, today!