See the Taurus: Star Constellation from the UK!

If you want to know more about star constellations, there is no better place to start than Taurus. This constellation is not only one of the biggest with multiple mythological stories attached to it, but it even has exceptionally bright stars and one of the closest star clusters to Earth.

From French cave paintings to when to see Taurus in the UK, this is the only Taurus star constellation guide you need!

The Taurus Star Constellation and Mythology

In Latin, Taurus was a word used to mean bull. It is strongly connected to ancient mythologies from different peoples, and knowledge of Taurus is argued by some academics to stretch back to 15,000 BC. The reason for this is because there is a painting within a French cave that was made around the same time, and thought to depict the Taurus bull constellation.

In Babylonian mythology, Taurus is connected with the Bull of Heaven from a famous epic poem called the Epic of Gilgamesh. The same bull with heavenly connotations has been traced within Egyptian beliefs. But in Greek mythology, Taurus is connected with something different. In fact, Taurus is most often associated with Zeus himself. This is because Zeus is said to have transformed into a white bull to abduct the princess Europa. Other Greek myths even connect Taurus to Zeus’s lover, Io. 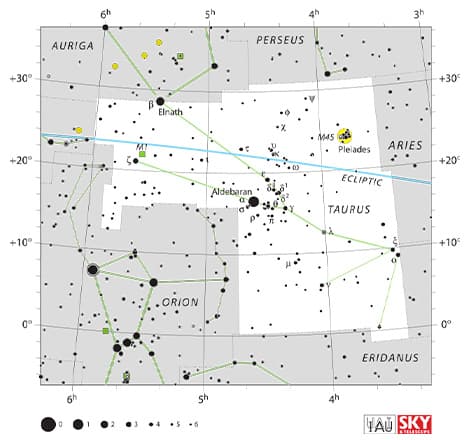 Joining the constellations’ main stars in a certain way can help us reach an image of a bull. Naturally, a bull can be positioned in so many ways, so how does the Taurus star constellation portray the bull image? The answer is just with the bull’s upper torso, head and horns in view. The reason for this may be linked with Greek mythology. It is believed that Taurus is not shown with a full body because Zeus travelled through the sea with the princess, suggesting part of the bull’s body would be under the water.

The positioning of the bull’s horns is also debated. Some peoples believed the constellation image had a bull with horns pointing upwards, due to the aforementioned heavenly references, while others depict the horns facing forwards. These details are not seen with the naked eye and stargazers need to be imaginative to stand in the shoes of our ancient ancestors peering at the sky.

How Many Stars Does Taurus Have?

Where in the Sky Is the Taurus Star Constellation?

The Taurus star constellation is situated in the northern sky in the first quadrant, i.e. NQ1. It is visible between latitudes of +90 and -65 degrees, and one of 13 zodiac constellations. It neighbours lots of other constellations with interesting mythology and symbolism, including Gemini, Aries, Cancer, Virgo, Leo and many other well-known star constellations. Because Taurus is the 17th largest constellation covering almost 800 square degrees, it is one of the most fun to look out for.

When Can You See Taurus from the UK?

But it is not just its size that makes Taurus exciting to hunt down. Its many bright stars and two nearby star clusters will help even novice stargazers find Taurus in the UK skies.

How Far Away Is the Taurus Star Constellation?

Star constellations can easily trick us. Because all of the stars are so far away from Earth, it could be believed that they are all a similar distance from Earth, but that is not true. It is the reason why we cannot give one answer when wanting to know the distance between the Earth and the Taurus constellation.

Each star is a different distance from us and some of Taurus’s stars are much further than others. The brightest star, Aldebaran, is relatively close and just 65.1 light years from us. Whereas the Pectus Tauri is a whopping 480 light years away from Earth. Now you know this, you’ll never be tricked by constellation distances again!

Want to recreate famous stargazing scenes from the movies with your loved one? We know a way to make it even more magical! You can now name a star for someone special. Whatever the occasion, from birthdays to Valentine’s, choose Star Name Registry to help with your unique star-themed gift.