The Aries Star Constellation: What, when and where?

The Mythology and History of the Aries Star Constellation

In Latin, Aries means a ram and is why these stars depict said animal. The image has been linked to figures from different mythologies. The most notable and referenced is the golden ram within Greek mythology. The golden ram came to the rescue of King Athamas’ children by the order of his first wife, in what was really a typical domestic problem involving an evil stepmother. In the end, the children were saved and the ram was sacrificed to Zeus. The ram’s fleece was kept and became known as the golden fleece. Interestingly, in later mythology, the same fleece was taken by Jason and his Argonauts. 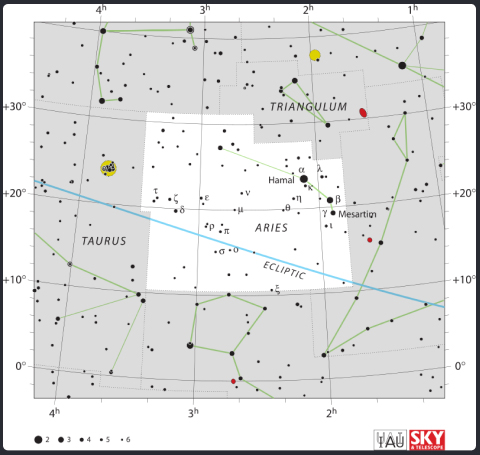 To create a constellation, certain stars are joined together to form an outline of an image. Of course, this new image of joined-up stars will not be elaborate or with fine details. Stargazers need to somewhat use their imagination to see the same images that were recorded from ancient times. For example, those looking at the Aries star constellation with a naked eye may not first see anything like a ram – or the even older image of a farm hand. Earlier medieval depictions of Aries as a ram showed the animal as it would if it was moving, almost like it was running through a field. More recent images have shown the constellation’s ram to be sitting with one outstretched leg.

The brightest star in the Aries constellation is called Hamal. This star also makes it into the top 50 brightest stars in the sky, coming in at 49th place. The star is an orange giant and twice as big as the Earth’s Sun. Other cool facts about Hamal include:

Where Is the Aries Constellation?

The Aries constellation is situated in the northern hemisphere’s first quadrant (NQ1). It takes up 441 square degrees. It is certainly not one of the largest constellations and measures in as the 39th largest star constellation. It can be seen on latitudes between +90 to -60 degrees.

The Aries constellation neighbours one of the biggest constellations, which is almost three times bigger than Aries, namely Cetus. It is also close to two other zodiac star constellations known as Pisces and Taurus. The latter has an interesting history dating back to the Bronze Age!

When Can I See the Aries Star Constellation in the UK?

Aries is not one of the brightest constellations to look for. You will need low light pollution to see it best. The better news is that the ram’s head is noticeable and peers back on itself almost as though it is admiring its own beautiful fleece. Looking for these constellations can be a fun mini-adventure for the family, especially if you name a star after a loved one.

How Far Is the Aries Constellation from Us?

As we gather together on brisk wintery nights to marvel up at the night’s sky and the Aries constellation, your mind might start to wander and think about how far we are from these stars. Your head might start to hurt just trying to comprehend the distance between us and those stars. We’ll leave explaining time and space to the people at NASA and academics like Neil deGrasse Tyson.

However, what you should know is that those stars are not all the same distance away. Some are much closer to us than others. In fact, we are closer to two of the stars than those same two stars are to the remaining three stars in this constellation. The aforementioned Hamal and Sheratan are around 60-66 light years away, and the other three stars in the Aries constellation are 160+ light years from Earth.

Learn more about the different zodiac constellations and others soon by visiting us again at Star Name Registry!