Explore the Sea of the Sky: The Pisces Star Constellation

How can the sky have a sea? It sounds odd, but when you learn more about the Pisces star constellation, you will understand how. This constellation is one of 13 situated within the zodiac. It boasts interesting mythological symbolism and its imagery still gets debated during modern times.

Find out all the important facts about the Pisces constellation below. You can even learn when you can see Pisces from the UK. Whether you are a seasoned stargazer or new to the telescope, this post is for you!

What Is the Pisces Constellation Its History and Mythology?

The Pisces constellation has been referred to since Babylonian times. Pisces comes from Latin and means more than one fish, i.e. the plural of singular fish. The constellation and its fish image have been connected with Greek mythological figures frequently. Pisces’s symbolism is most often tied to Eros and his mother, Aphrodite, who both escaped a monster called Typhon by transforming into fish.

This is not the first Greek figure to escape Typhon in this way. One god called Pan did something similar by giving himself a fish-like tail, but as he was a goat, he is connected with the sea-goat image of Capricornus instead. There is also a Roman variation of the legend. Instead of Eros and Aphrodite, the Romans connected Pisces with Cupid and Venus who escaped the same dangers by riding on the backs of fish.

But these aren’t the only cool stories associated with Pisces! 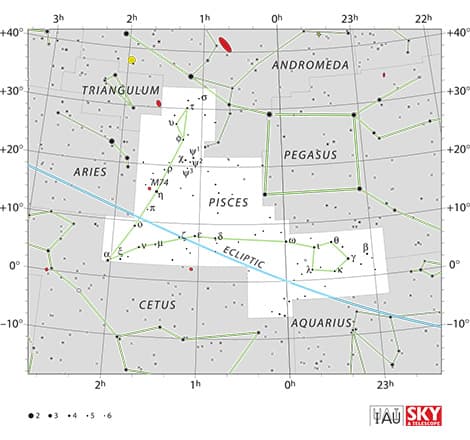 So, what does the Pisces star constellation even look like? The truth is - just like any star constellation – it would be hard to make out its apparent imagery by looking at the stars with your naked eye. Stargazers need to harness their creativity and imagination to walk in the shoes of stargazers and ancient groups of the past. For most stargazers, this makes looking for constellations even more fun.

What Is Pisces’ Brightest Star?

Pisces may be known for its cool mythology and interesting debates still happening today, but it is not known for being a constellation with bright stars. The brightest star in the constellation is nicknamed Kullat Nunu, which:

Another notable star from the constellation is Alrescha. In Arabic, the name means something along the lines of ‘the well rope’.

Where Is Pisces in the Sky?

Pisces has similar neighbours. It is situated near the aforementioned Aquarius, as well as Cetus, Delphinus, Eridanus, Hydra and others. What do all these have in common? All of these constellations have aquatic symbolism, and many are sea animals, real or mythical. This is why Pisces is located in a part of the sky commonly referred to as The Sea.

More scientifically, this constellation is in the Northern Hemisphere’s first quadrant (NQ1) and is seen between latitudes of +90 and -65 degrees. It is the 14th largest constellation and occupies a considerable 889 square degrees.

When Can You See the Pisces Constellation from the UK?

Pisces is exceptionally interesting, but one unfortunate fact is that seeing this constellation is not as easy as others. The reason for this is because most of its stars are faint. In the UK, it is best to go hunting Pisces in the Autumn, specifically between the 6th and 9th of November. You will need to do this with low to no light pollution. It can be best viewed around 9pm. Although it is not the easiest constellation to spot, if you manage to do it, it becomes all that more special.

How Far Is the Pisces Star Constellation from Earth?

For example, ε Piscium, ι Piscium and γ Piscium are all stars from the Pisces constellation, but they are around 182, 45 and 138 light years from us on Earth, respectively.

Additional Facts on the Pisces Constellation

Pisces may be fishy - but our facts aren’t. And just in case you want more of them, here are three bonus facts about the Pisces constellation.

If you are planning on looking for Pisces or any other stars with friends or family soon, we have a great way to make it more fun. You can now name a star with Star Name Registry!. It may be the perfect gift for your loved one!