A Complete Guide to the Pegasus Constellation

Most of us have heard of Pegasus from the ancient Greek stories, but have you ever seen this beautiful white horse? Well, you can if you know where to look.

Below you can find everything you need to know about the Pegasus star constellation, from its mythology, major stars and where to find Pegasus in the sky.

The Mythology of Pegasus

You don’t need to be a genius in Greek mythology or a frequent stargazer to know who Pegasus was. Pegasus was a white horse with wings and there are many tales about Pegasus in mythology, many of which can be quite gruesome and included a lot of killings.

One of the most famous stories involving Pegasus was his adventure with a hero named Bellerophon. He was sent to kill a monster called Chimaera who breathed fire and was ruining the land. But first, Bellerophon tamed Pegasus using a special golden bridle that went over the horse’s mouth, which was given to Bellerophon by Athena. Flying on Pegasus, the hero managed to kill the monster - and followed his heroics up with many other jobs for the king of the land.

But the fame and success of Bellerophon went to his head and he believed he should now be one of the gods. So, Bellerophon got onto Pegasus and attempted to fly to Mount Olympus and join the other gods. But he fell off on the way landing back on Earth. Later, Pegasus did make it to Olympus with the gods and Zeus used the white horse to carry his thunder and lightning. Zeus then rewarded the work of Pegasus by putting him into the sky as the Pegasus star constellation. 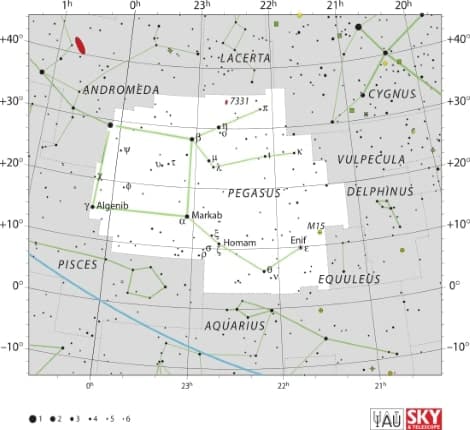 Constellations are formed by joining stars together with imaginary lines. You may have done a similar exercise as a child with a join-the-dots book. Once these lines have been joined in a specific way, we have a shape which is meant to represent the constellation. Most constellations do not look exactly like their imagery, but with some imagination and wonder, we can make out what our ancient ancestors peered at in the sky. The Pegasus constellation is naturally said to look like Pegasus, the white horse with wings. However, it is usually agreed that the image from Pegasus only shows the top half of the horse’s body. The wings are present in the constellation - but the back legs are not.

Have you ever heard of an asterism? This is a group of bright stars that form a shape in the sky. Most people know asterisms more than they know constellations because they are easy to remember and make out – or point out to friends. The Pegasus constellation has a famous asterism, officially called The Great Square of Pegasus. It is a square that depicts the body of the horse using bright stars. These stars are:

Although these stars are bright, none of them is the brightest star in Pegasus. That award goes to a star named Enif, otherwise known as Epsilon Pegasi. Its name means the nose and it is located on the horse’s muzzle.

Where Is the Pegasus Constellation Located?

The Pegasus constellation is huge and there are only six constellations that cover a larger area. Pegasus blankets 1121 square degrees of the Northern Hemisphere’s fourth quadrant. This makes Pegasus visible between latitudes of +90 and -60 degrees.

Pegasus is one of nine constellations from the Perseus family of constellations. Some of these are Pegasus’s closest neighbours, including the Andromeda constellation and the boastful Cassiopeia who got into trouble with the sea nymphs.

How to Find Pegasus from the UK

To stand the best chance of finding Pegasus in the sky, you should go stargazing in October and start looking around 9pm. To improve your chances further, make sure you get away from the city or town and get into nature. Low light pollution maximises your chance of seeing Pegasus clearly – and more majestically!

How Far Is Pegasus from Earth?

Just like all constellations, the stars within Pegasus are different distances away. Some of the Pegasus constellation stars are twice as far away or more than others. This is the reason why there is no answer to this question. Distances can be calculated between the Earth and stars – thanks to brainy astronomers and technology – but we cannot calculate the distance between Earth and a constellation because a single distance doesn’t exist.

Lesser-Known Facts about the Pegasus Constellation

Discover more facts about the Pegasus constellation here, including why one of Pegasus’s stars is controversial.

The stars don’t need any more help to be fascinating and super exciting to look for. But just in case you want to make stargazing even more special, why not name a star after someone you love?