The Orion Constellation: Hunter of the Night’s Sky

We can’t promise that you will be as bright as the Orion star constellation after reading this guide, but you will certainly learn lots of cool and interesting Orion facts.

Orion is visible from the UK for a long period of the year and is one of the easiest to find. Learn how to see Orion’s Belt and its stars easy with our help. Soon you will be stargazing just like in the movies!

The Mythology of the Orion Constellation

Constellations often have mythological figures and stories connected to them, but some of them interact with nearby constellations in the sky to paint a bigger picture or elaborate on myths. Orion is one of these constellations, which makes it even more interesting.

In Greek mythology, Orion is connected to a namesake figure, a handsome hunter called Orion. He pursued the seven sisters and Zeus shielded these sisters from Orion’s advances by placing them in the sky as The Pleiades, a famously bright star cluster within the Taurus constellation. The Taurus constellation is represented by a bull which Orion is suggested to be attacking in the sky.

Other mythological stories about Orion exist, but many of them have grave inconsistencies between cultures. The most prominent myths involve a scorpion, but even these are often inconsistent too. Yet, stories usually involve a battle between Orion and the Scorpion, and it just so happens that Orion sits opposite the Scorpio constellation in the sky. They appear at different times of the year as if they are evading each other. 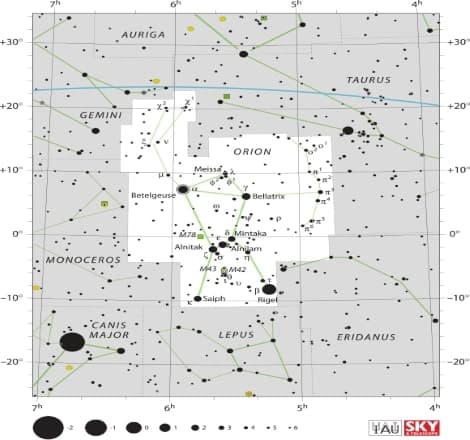 Looking up at Orion will not give us the image as intended by ancient cultures. We need to join the stars together in a specific way and add details with our imagination. A Greek thinker names Claudius Ptolemy was one of the first to do this in the 2nd century; he recorded Orion as being a hunter with a club and a shield-like device made from a lion’s pelt. These are both items commonly associated with Hercules, but there can be no confusion that Orion is intended to depict Hercules because he already has his own constellation.

What Are the Main Stars in Orion?

Most people agree that Orion has eight or more major stars within the constellation. It also includes some of the brightest stars in the sky, which will help you find Orion when stargazing. Three of the constellation’s most famous stars make up Orion’s Belt (information below!). These are called Alnilam, Mintaka and Alnitak. However, none of these stars is the brightest in Orion. That award goes to Rigel, the sixth brightest star in the sky. Its other major stars include:

Where Is the Orion Star Constellation?

When Can I See the Orion Constellation from the UK?<

Orion includes an asterism which makes it even easier to find. An asterism is a combination of stars that the general public usually recognise and connect with something familiar. Some examples include the teapot and the big dipper. In the Orion constellation, there is something known as Orion’s Belt made up of three massive bright stars.

You will be able to see these bright stars and the rest of the constellation between November and February in the Northern Hemisphere between latitudes of +85 and -75 degrees. However, if you want the best chance of seeing Orion from the UK, it is recommended to go stargazing in January and start looking around 9pm.

If you need further help, you can always research the secrets to stargazing from home!

How Far Is the Orion Constellation from Us?

There are no silly questions when it comes to stars and constellations. After all, these are some of the most confusing, complex and magnificent parts of our world. But you will soon realise that you cannot put an exact distance between Earth and a constellation.

The reason for this is not because brainy scientists cannot judge the distance between the two, but because the stars in a single constellation are all different distances away. Most stars from one constellation are nowhere near each other, so there is no one answer to the question. For example, Orion’s Belt may look like they line up near each other, but those three stars are not close to each other at all.

Bonus Facts About the Orion Constellation

Orion is a complex constellation and one of the most fascinating to learn about. So why stop here? Keep reading to discover unique bonus Orion information that will put you top of the constellation class:

You can now share this information with someone who also likes stars and constellations. But you could always go one better and share something even more special.

You can now name a star after someone special at Star Name Registry. Learn how this is made possible and choose the perfect gift with us!