THow to Find the Leo Star Constellation from the UK

Get your claws into cool constellation facts right here. In this post, we will take a look at the Leo star constellation, including its mythology, exceptionally bright stars – and even where you can see Leo from the UK.

You may have seen Leo without ever knowing it. Has anyone ever pointed the backwards question mark of stars in the sky to you before? Learn more quirky details about Leo in this roaring-good constellation guide.

The Leo constellation was known by ancient peoples well before the Greeks. The ancient Persians, Indians and Syrians who came before knew the constellation too, but they all referred to it with lion symbolism.

Leo is the Latin name for Lion and ancient Greeks connected the constellation with the mythological Nemean Lion. Unlike other lions, this one had special fur which prevented it from being killed with weapons. Hercules had to corner the lion and break its back with his bare hands to eventually kill it. He then wore the special fur of the lion and Zeus placed the Leo constellation in the sky to remember Hercules’s heroic feat.

The earliest major academic recording of Leo was made by Greek astronomer of the second century, Claudius Ptolemy. He described an astonishing 48 of the 88 constellations that are officially recognised today. 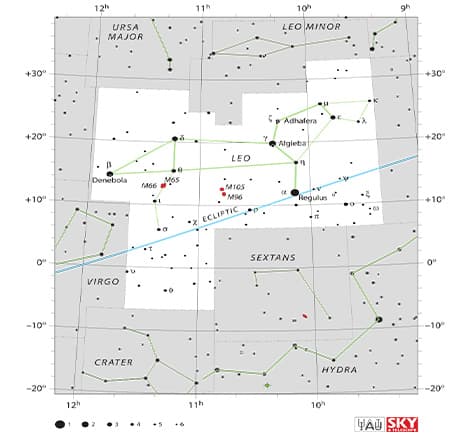 Star constellations require an element of imagination and creativity to see the images that they are supposed to represent. First, you need to join the stars in a specific way to get the outline of the constellation, and even then, it is not always easy to interpret. Some people may see the crouching lion taking shape when looking at Leo, while others may see a bent coat hanger.

One aspect of the constellation that is referred to most is the ‘backwards question mark’. This is on the right side of the constellation which would be where the lion’s mane and head are located. These sorts of star references are what the seasoned stargazing community know to be an asterism. An asterism is a grouping of stars with an unofficial name but known among the general population.

What Is the Brightest Star in the Leo Constellation?

The Leo constellation includes some of the brightest stars we know of. Bright stars are more impressive and make looking for Leo easier. The brightest is Regulus, which is the 22nd brightest star. It also boasts some other interesting facts:

Another interesting star in Leo is Denebola. It is also bright and twice as close to us than Regulus. It is the 61st brightest star - and therefore easy to spot! Stars can be complex and confusing, but learning about the layers of stars is a lot of fun!

The Position of the Leo Star Constellation

Leo is one of 13 zodiac constellation and is located between Cancer and Virgo in Northern Hemisphere’s second quadrant (NQ2). Other neighbouring star constellations include Crater, Lynx and Ursa Major.

You can see Leo from latitudes between +90 and -65 degrees. The constellation is one of the largest in the sky. It covers just under 950 square degrees and there are only 12 constellations bigger than Leo.

When Is the Leo Constellation Visible from the UK?

If you are just starting out as a stargazer or want to look for Leo as a one-off event, the good news is that lots of things are in your favour. The size of this constellation along with its many bright stars will help new stargazers find Leo from the UK much easier than many other constellations.

Leo is best visible in the UK in April and it is recommended to look for the lion around 9pm with low levels of light pollution. You will also need a clear night. For the best chances of success, head out of big cities or towns and get into the wilderness. The UK has some great spots which are perfect for stargazing, and for searching sparkling lions by night.

How Far Is the Leo Constellation from Earth?

It is useful to know that constellation stars are not always close to each other. They may seem like they sit at close distances when we peer up from our planet, but some are closer than others. Sometimes, we are closer to one star in a constellation than that star is close to other stars in the same constellation. That is why there is no single answer when asking for the distance to Leo from Earth.

Did you roar? We heard you. Here are some more cool facts about the Leo star constellation:

Know someone with the loyalty and heart of a lion? Give them a cool space-themed gift by naming a Leo star after them. You can make that happen at Star Name Registry!