The Cassiopeia Constellation: The Beauty of the Sky?

If Cassiopeia was on social media today, she would spend most of her time posting selfies for her followers. But Cassiopeia’s vanity is what got her in trouble with the sea creatures. You can learn the constellation story of Cassiopeia right here, as well as when you can see Cassiopeia in the sky

For everything you need to know about the Cassiopeia star constellation – read on!

The Constellation Story of Cassiopeia

The story of Cassiopeia and her constellation comes from mythology. She was King Cepheus’s wife and famously boasted that she was more beautiful than 50 sea nymphs, known as the Nereids. They were angry because of Cassiopeia’s vanity and boastfulness and asked their sea god called Poseidon to make her pay for her comments. Poseidon was married to one of the nymphs and obliged.

He sent a sea monster called Cetus after her. In the meantime, the king and his wife were told to sacrifice their daughter to the monster to be forgiven for Cassiopeia’s vanity. They reluctantly chained their daughter, Andromeda, to a rock – but she was saved by Perseus who went on to marry her.

But the myth doesn’t end happily there. Perseus was challenged by one of Andromeda’s earlier lovers. Perseus won the battle by showing the head of Medusa who he had recently killed. This turned the challenger and his army into stone. But the king and queen were also subject to Medusa and turned to stone too. Poseidon then put the king and queen in the sky as neighbouring constellations. However, Cassiopeia spends half of the year upside down as a punishment for her comments and boastfulness. 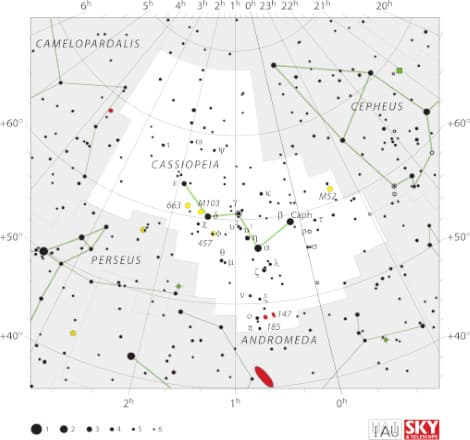 So, Is the Cassiopeia Constellation Just as Beautiful?

After all that bragging, you may be curious to see if Cassiopeia is as beautiful as she thought herself to be. Star constellations are made by joining imaginary lines between the constellation stars to give a rough shape. We then must harness our imagination to fill in the details and look at the constellation just the way ancient peoples once did. But don’t expect to see a detailed figure of a lady in the sky if you go looking for Cassiopeia soon. Nevertheless, looking at the stars is a beautiful experience – nobody can argue with that!.

There are many portrayals of the Cassiopeia constellation. Yet, the most famous one is of Cassiopeia sitting on a chair, sometimes depicted as her throne, while brushing her hair. The fact she is grooming herself is a reference to her vanity.

The Main Stars of the Cassiopeia Constellation

Many people agree that Cassiopeia has five main stars. It does have many more interesting stars, but the reasons why people suggest five is because these five stars create an asterism in the shape of the letter W. An asterism is a shape made by stars that the general population recognise without any stargazing or constellation expertise. In Cassiopeia, the asterism looks like the letter W and is made up of stars called:

Where Is Cassiopeia in the Sky?

The Cassiopeia star constellation can be found in the Northern Hemisphere’s first quadrant. It covers almost 600 square degrees and is the 25th biggest constellation.

Are You looking for Cassiopeia from the UK?

The best news if you are looking for Cassiopeia in the sky is that it can be seen from the Northern Hemisphere all year. However, there is still a prime time to go seeking Cassiopeia - and see if she is as beautiful as she believed

Head away from built-up areas in November for the best chance to Cassiopeia in the UK sky. It is best to start stargazing at 9pm. If you need ideas of where to go and have your stargazing adventure, here is a cool guide of the best spots to stargaze from in the UK

How Far Is Cassiopeia from Earth?

Unless you are a frequent stargazer or have been studying the stars for a while, you will be caught out by questions about distances from Earth to constellations. When we look at the stars it is easy to think that the stars are around the same distance away, and thus, we could put a roundabout distance between us and them. This is not the case.

The stars of a single constellation are often very different distances from Earth. Some can be rather close to each other, and even relatively close to Earth, but still there is no single distance between us and constellations. For example, in the Cassiopeia constellation, Schedar is 228 light years away while the Ruchbah, another Cassiopeia star, is less than 100 light years from us.

The Queen of the Northern Sky is nothing short of fascinating. That’s why we decided to offer you even more cool facts about the Cassiopeia constellation:

For more information on stars and constellations, don’t forget to check out our other constellation guides as well as our blog

You can even name a star after someone you know. Learn how by zooming over to Star Name Registry! like a shooting star, now!