The brightest star of the Scorpius constellation is Antares, or Alpha Scorpii. It’s one of the largest stars that we know of at our international star registry. And when we say large, it we mean massive! 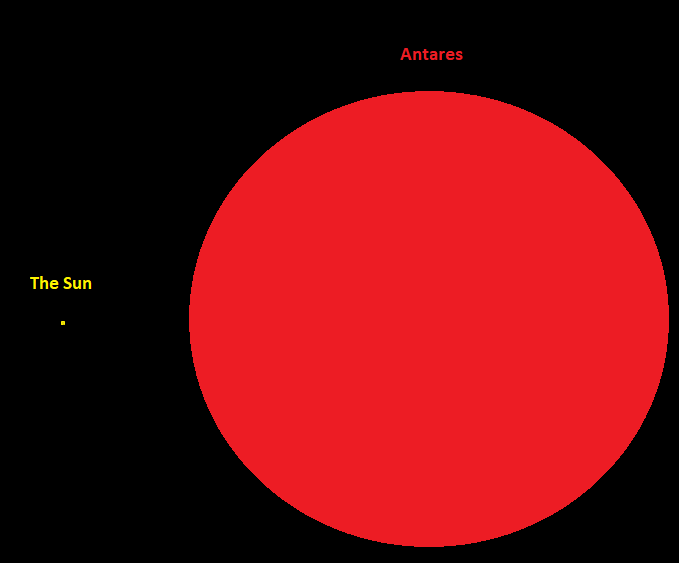 The above picture isn’t an exact scale, but it should give a good idea of just how impossibly gigantic Antares is. For some extra context, if we were to pop Antares in our solar system its circumference would extend far beyond the Earth’s orbit of the sun – going outward as far as Mars. It is certainly well worthy of its scientific classification, a Red Supergiant.

Like all red supergiants Antares is a very old star. It has consumed its core’s supply of Hydrogen fuel, and Helium is beginning to accumulate within its core. Hydrogen is now undergoing nuclear fusion in the outer shells, which causes the circumference of the star to expand.

However, Antares didn’t used to be a Red Supergiant. A Red Supergiant is very close to the end of its lifetime. That hydrogen and helium fuel will eventually run out and the star will collapse and then supernova. 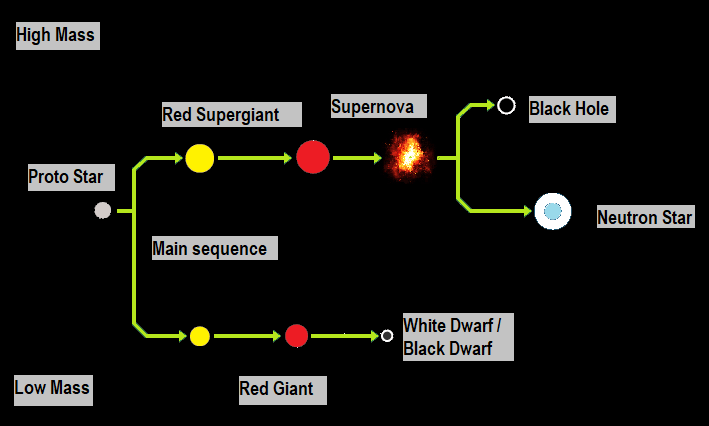 In the above image, we see how different masses affect a star’s evolution. Lower mass stars like our sun also use up their fuel and expand, though not to the same degree. When their fuel runs out they become white dwarfs and then black dwarfs

High mass stars on the other hand will supernova and either become black holes or neutron stars.

We know that Antares is due its end very soon on the astrological time scale of things. It could collapse tomorrow or a million years from now.

For those who are new to stargazing, Antares is a great start to try and spot as it is the 16th brightest star in the sky. Because it is located in the southern half of Earth’s sky, you are always in with a better chance of seeing this star the further down south you are. So people in Cornwall will have a much better time trying to spot it than people in Thurso.

Antares is also a circumpolar star, which means that it never sets and is visible every night of the year from Earth’s southernmost regions.

If you’re looking to adopt a star, sadly Antares is not available. Nevertheless, there is a multitude of others to choose from on our star registry website.