Most people know the word Virgo because it is popular among astrologists and those who like horoscopes. But astrology and astronomy are not the same. If you want to hear about Virgo in astronomy and learn about the awesome Virgo star constellation, you came to the right place.

Virgo is an interesting constellation because of its huge size, plentiful mythological connections and its bright stars. Do you know which national flag includes the brightest star from the Virgo constellation? You will soon…

Read on to learn more about Virgo stars and when you can see Virgo from the UK!

Virgo is Latin for Virgin, which helps to explain some of the mythological stories connected to Virgo. In more recent times, and by that we mean the Middle Ages, Virgo was depicted as the Virgin Mary. More ancient peoples also connected the constellation to women and goddesses. Many of these figures held agricultural symbolism. For example, the Greeks referred Virgo to Demeter and the Romans said Virgo related to Ceres. These were both goddesses of crops and wheat.

There are even more mythological figures that have been tied with Virgo, including Persephone, the daughter of Zeus and the aforementioned Demeter. But the arguably more interesting myth is that of Erigone. She was the daughter of Iacrius of Athens, who was murdered, which then led to Erigone killing herself. Now they lie in the stars united once more because Virgo is situated next to the Boötes constellation – and Boötes is often associated with Iacrius. 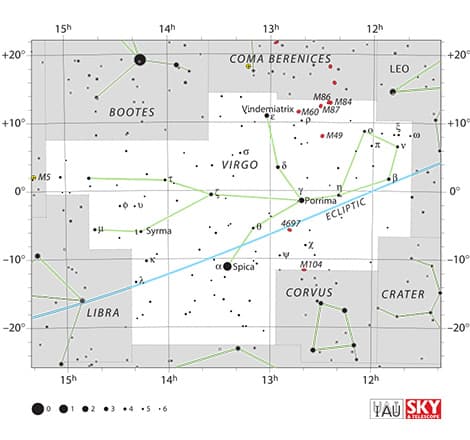 When you join the stars of the Virgo constellation, are you going to be blown away with a detailed image of one of these goddesses? The answer is – not exactly. But that shouldn’t stop you going in search of Virgo discovery. Looking for these stars that can form a pattern is just as exciting even if you don’t have the best imagination. But how amazing is it that we look up at the night’s sky now and look for the same images that our ancestors also tried to do thousands of years ago! You can see what you are more likely to see with the naked eye in the image below.

What Is the Brightest Star of Virgo?

Virgo includes some bright stars and many bright galaxies. The brightest star in the Virgo constellation is called Spica. It is the 15th brightest star in the sky, yet, it is not much fainter than many of the stars deemed brighter than it, such as Fomalhaut and Altair. Here are some more cool facts about Spica:

Where Is Virgo in the Sky?

The constellation is located in the Southern Hemisphere’s third quadrant (SQ3) and is visible between latitudes of +80 and -80 degrees. Some well-known star constellations neighbouring Virgo include Leo and Libra. Some other constellations are nearby which are not often known about among new stargazers, including Serpens Caput and Coma Berenices.

When Can I See the Virgo Star Constellation from the UK?

The Virgo constellation covers a tremendous area of the sky. It is the second largest constellation measuring a phenomenal 1294 square degrees. There are aspects of Virgo that will help anyone looking for Virgo from the UK to find it, but the aforementioned bright star, Spica, should make it easiest to orientate.

The best times to look for Virgo from the UK are in the months of March, April and May. Just because the constellation is big does not make it easy to spot. It is recommended to get away from built-up areas and into remote places with low light pollution to see it best.

How Far Away Is the Virgo Constellation?

Constellations are made up of many stars and deep objects, so it would be almost impossible for all of those stars were the same difference from us here on Earth. All of the stars that make up the Virgo star constellation are at different distances, and thus, there is no one answer to the question.

Some of Virgo’s stars are really far away, such as its brightest star, Spica. It just goes to show that just because a star is bright, does not mean that it is close to us. Other stars within Virgo are closer to Earth, such as Auva which is less than 200 light years away, and Heze, which is around 75 light years from us.

If you think about it, we could travel to Heze and back to Earth twice before we would reach Spica – if it was possible!

Big and bright – two exciting words to describe the Virgo constellation. But there are even more exciting Virgo facts you should know about: