Everything There Is to Know About the Scorpius Constellation

Scorpius is a constellation that belongs to a group of 13 constellations found within the zodiac, the area of the sky where our Moon, Sun and nearby planets pass. It is also one of the constellations our species has known about the longest - and it is easier to find than other constellations.

What makes the Scorpius constellation easy to find? Learn the answer to this question and lots of other fantastic facts about Scorpius below. Don’t worry, you will only be stung with awesome star facts here!

Working out what Scorpius may have meant in Latin does not require your magnifying glass or your best detective impression. As you guessed, it means scorpion. Claudius Ptolemy catalogued the constellation along with 47 others in the 2nd century, but evidence suggests ancient peoples referred to the Scorpius constellation long before.

There are two Greek mythological stories connected to Scorpius. The first is that Scorpius boasted he could kill any beast and defeated another Greek figure Orion, which just so happens to be the constellation next to Scorpius. The second story does not include Orion. Instead, it tells the myth of Scorpio attacking Phaeton’s chariot. However, the attack did not go to plan and it turned Africa into desert. Zeus was forced to intervene in the attack with a lightning bolt which threw Phaeton into the River Eridanus. This second myth also includes reference to another constellation as Eridanus is a constellation with river imagery. 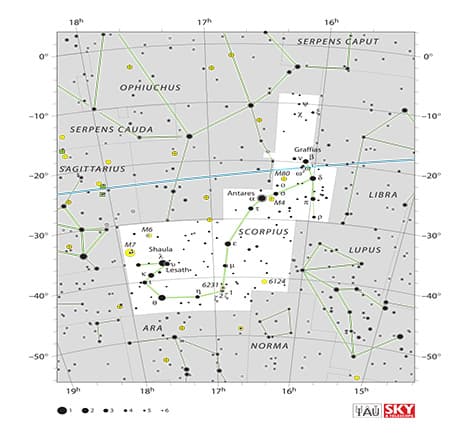 Constellations are made by connecting the stars with imaginary lines. This is something you may have done as a child with a connect-the-dots book to create a picture. In astronomy, this is done with stars to make the constellation image, but of course, details are added to make them even cooler. For that reason, when seeing constellations with the naked eye, you are expected to use a bit of imagination. However, the Scorpius constellation is one of the few constellation images that you can make out with limited imagination due to its curling scorpion-like tail.

How Many Stars Does Scorpius Have?

Scorpius has over ten stars with planets in its constellation, as well as four Messier objects. The most famous star within the constellation is called Antares. It is the 16th brightest star in the sky with some people counting two of the brighter stars as a single star, meaning it could be argued to be the 15th brightest. It is also:

Other interesting stars in this constellation include Shaula and Acrab. The former is also very bright and the 25th brightest star we can see.

Where Is the Scorpius Star Constellation?

There are a couple of reasons that make Scorpius easier to see than other zodiac constellations. One of them is due to its positioning in the sky. It is situated in the Southern Hemisphere’s third quadrant (SQ3), which is close to the centre of the Milky Way. If you already know how to find the Milky Way, you are almost certain to know where to look for the Scorpius constellation.

To be more accurate, it can be seen between latitudes of +40 and -90 degrees. It is the 33rd largest constellation in the sky and covers almost 500 square degrees. You could always make the occasion even better by naming a star after someone special!

When Is the Scorpius Constellation Visible from the UK?

Its convenient location and size both make Scorpius easier to find than other star constellations. But there is another reason why Scorpius will not cause you too many stargazing headaches. If you were paying attention above, then you already know the reason. It includes some exceptionally bright stars that make parts of the constellation stand out.

All of this information is useless unless you know the best time to see Scorpius from the UK. It is most visible in July around 9pm. So, grab your camping gear and get away from urban light pollution for a summer evening of stargazing with friends. You could always make the occasion even better by naming a star after someone special!

Distance to Scorpius Constellation from Earth?

Newbie stargazers can be forgiven for thinking there is an answer to this question. The reason why there is no specific answer to the distance to the Scorpius constellation from the Earth is because the constellation is not all in the same place. Because it is made up of many stars, there are multiple answers to this question. Some of the stars will be much closer to us than others. Some stars even have a greater distance between each other than they do to Earth.

Similarly, just because a star is bright does not necessarily mean it is closer to us. The famously bright Antares star is approximately 550 light years away from our solar system!

Didn’t find what you were looking for? Maybe the bonus facts about Scorpius below will help you understand the Scorpius constellation even more:

Whether you see a scorpion, tree or something else, looking for constellations and stars is always excellent fun! Star Name Registry!