Your Complete Guide to the Phoenix Constellation

The Phoenix constellation is better known in the Southern Hemisphere because it is easier to see from there. But that doesn’t mean it is impossible to see Phoenix from the UK.

Learn everything you need to know about the Phoenix star constellation in this thorough stargazer’s guide!

How Did the Constellation Phoenix Get Its Name?

The Phoenix constellation may not be one of the most known constellations of the sky, but its name will ring a bell with most readers. Anyone who likes Harry Potter or ancient cultures will know that a phoenix is a type of bird – and a majestic one!

It is a sacred bird in lots of cultures, including ancient ones. From the Chinese and the Indians to the Greeks, the phoenix bird has been well documented. It is somewhat like an eagle but often depicted with gold, red and purple feathers. It also has a gold and scarlet tale.

Because the phoenix bird is so widely known, there are many myths and ancient practices that are dedicated to it. A famous Roman poet called Ovid described the phoenix as living for five centuries before setting itself on fire in its own nest. According to Ovid’s legend, the fire would result in a younger phoenix being born, which would then carry the nest to the temple of Hyperion. Other versions of the myth state that the new bird would carry the old phoenix’s ashes in an egg to Heliopolis. 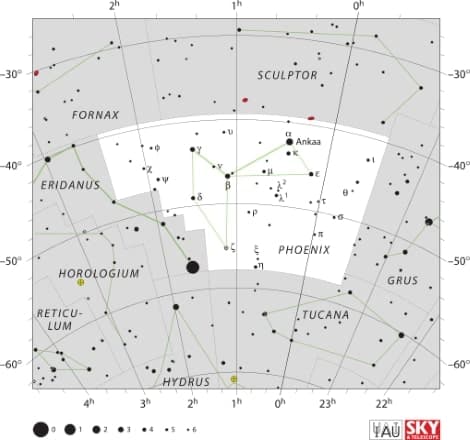 The phoenix image has been associated with the constellation since it was published on a globe in the 16th century by the Flemish thinker, Jodocus Hondius. It has been suggested that the stars can be arranged with imaginary lines to depict the phoenix in all its glory. The phoenix stands open winged and tilting its head to the side. Some add in other details like fire beneath the phoenix. However, all details need to be conjured by the stargazer. Constellations rarely look exactly like the images they are suggested to represent. With the naked eye, some stargazers have suggested that the constellation looks more like a kite on a string.

The brightest star in the Phoenix star constellation is called Alpha Phoenicis. In Arabic it is called Ankaa which aptly means ‘the phoenix’. It is an estimated 85 light years from Earth and is classed as an orange giant. The other main stars within the constellation are called:

The Location of the Phoenix Constellation

The Phoenix constellation is located in the first quadrant of the Southern Hemisphere and is easily visible to those living in South Africa or Australia. It can be seen between latitudes of +32 and -80 degrees and covers 469 square degrees of this area of the southern sky.

When Can You See the Phoenix Constellation from the UK?

Just because Australians and peoples on the Southern Hemisphere have a much easier chance of seeing the Phoenix doesn’t mean you can never see it from the UK. The famous bird does show its wings in the northern skies at certain times of the year.

If you plan on looking for the Phoenix constellation from the UK, you will need to head out on a clear November night. Get away from light pollution and pack your imagination for a fun night of wonderous stargazing.

If you need additional help when stargazing for the Phoenix constellation or any other stars, you can use special stargazing apps to help you get your bearings or bring you more info!

How Many Light Years to the Phoenix Constellation?

The term ‘light years’ does not measure time, like the word ‘years’ does, but it measures distance. To be more specific, it measures the distance light takes to travel within one year on Earth. One light year is around six trillion miles distance. Therefore, the brightest star of the Phoenix constellation, Alpha Phoenicis, is 85 light years away, which is the same as 510 trillion miles from Earth – a long drive!

The Phoenix star constellation may not be as controversial as some other constellations, but that doesn’t mean it is short on cool and interesting facts. Read on to learn more Phoenix constellation facts not many people know about:

Know someone as majestic as the phoenix bird? Maybe a Harry Potter fan? Anyone who likes this bird may even love a star named after them from this area of the sky.

But that can’t be possible, right? Well, it is – and you can find out how to name a star after someone at Star Name Registry!

Don’t forget to read our latest reviews. They’re as dazzling as some of the stars!