The Truth About the Ophiuchus Star Constellation

But before you go further, you need to know how to say Ophiuchus correctly. It’s pronounced OFF-EE-YO-CUSS. But what does Ophiuchus mean? Its name comes from Greek and means the serpent bearer. This is why the constellation used to be called Serpentarius, which let’s be honest, is much easier to say.

Unlike many other constellations, Ophiuchus was not recorded before the classical era. The Babylonian peoples did not know of Ophiuchus the way we think of it today and a different constellation likely took its place, one that referred to sitting gods. It was recorded within Ptolemy’s 48 constellations during the second century.

There are various connections between the Ophiuchus constellation and figures from Greek and Roman mythology. The ancient Greeks made connections with Apollo who fought with a snake guarding a famous temple. The Greek’s later counterparts would associate Ophiuchus with a Trojan priest named Laocoön who was killed by sea serpents. Yet, the Romans considered the Ophiuchus constellation as a medical healer, Asclepius, who learned the secrets of warning away death by watching snakes. He is one of many heroes in the night’s sky!

His healing powers were not well-received by Hades who believed his flow of dead souls to the Underworld would cease because of Asclepius. Therefore, Hades’ brother Zeus killed Asclepius and made a constellation in the sky in his honour. 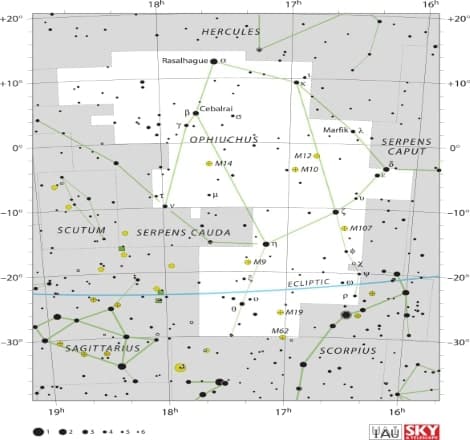 The Appearance of the Ophiuchus Star Constellation

When we go hunting for cool star constellations, we must first draw lines between major stars in a certain way - just like the ancient peoples did. This gives us an outline of the constellation. But from here we are on our own. We must then use imagination and creativity to see the images they are meant to represent. The Ophiuchus constellation is usually depicted as a man holding a snake, hence its Greek name which means serpent bearer. Earlier star charts illustrated the man trampling on the snake in the sky, while others have made Ophiuchus the man and nearby constellation, Serpens, as the snake. Serpens even has two parts to represent two parts of the snake.

The Brightest Star of the Ophiuchus Constellation

The brightest star of Ophiuchus is also one of the closest stars to us in the constellation. Although proximity to Earth does not influence how bright we perceive them. This bright star goes by the name Rasalhague and will help you find Ophiuchus when stargazing. This star is:

Where Is Ophiuchus in the Sky?

The Ophiuchus constellation is located near the celestial equator in the southern sky’s third quadrant. In fact, it is situated across the ecliptic which is why it is often considered a zodiac constellation – more on that later. It can be seen between latitudes of negative and positive 80 degrees.

The constellation is one of the largest and the 11th biggest in the sky. It is just shy of 950 square degrees. Other famous constellations are nearby, namely Serpens the snake, Hercules, Libra, Aquila and the Sagittarius constellation.

When Can You See the Ophiuchus Constellation?

From the UK you can see many of the best constellations during the summer months. This is great news because it allows us to escape the city and head into areas of low light pollution during warmer weather, even enabling us to take stargazing camping trips.

Ophiuchus calls for another summer camping trip because the best time to go looking for Ophiuchus in the sky is at the peak of summer, July. With bright stars and a clear night, you can find Ophiuchus from the UK even if you are new to stargazing.

Distance Between Ophiuchus and Us

We saved the drama and controversy for the end. Below you can find out why Ophiuchus is not always considered a zodiac constellation and some other interesting Ophiuchus facts:

Guys! We don’t need to argue about zodiac constellation. We could just admire their beauty with loved ones. If a friend or family member is really into stars and constellations, make their day by naming a star after them at Star Name Registry. It’s a really cool gift, especially considering we came from the stars in the first place!