When you look at the Libra star constellation from the UK, what do you see? Is it a crab’s claws, a set of weighing scales, or maybe a toppling house? If you have yet to see Libra from the UK yet, then do not worry, we can help make it happen!

This guide is for Earthling stargazers who want to know more about the Libra constellation, essential Libra facts and where to see Libra in the sky.

The Mythology of the Libra Constellation: Claws or Scales?

With most other constellations, the mythological stories associated with them all allude to the same imagery and theme. Even when there are multiple stories from different cultures, the constellation symbolism often remains static. With the Libra constellation, things are not so straightforward.

Some ancient peoples knew Libra as scorpion claws and tied it in with the libra constellation. Later, the Babylonians and Romans started to associate Libra with the idea of balance and started to see scales from this arrangement of stars. The switch to scales was reportedly because Rome was founded when the Moon was in the Libra constellation and signified a new balance. As the attachment to scorpion claws shifted to scales, Libra became associated with Astraea’s scales from Roman mythology. 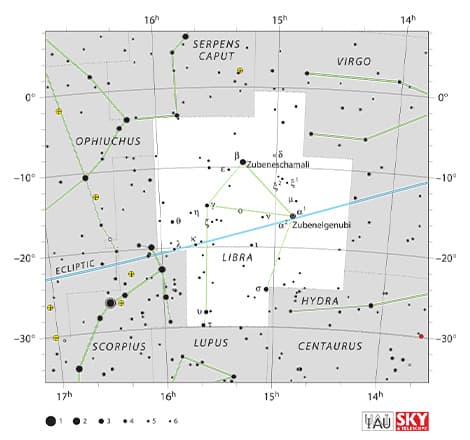 Anyone who has looked for constellations before will know that they rarely, if ever, look like the images they are associated with. The reason for this is because looking at constellations requires us to unlock our creativity and imagination. Whether you see the image you are supposed to, it is never going to prevent the beauty and wonder of looking at stars that have a rich history among worldwide cultures.

The Stars of the Libra Constellation

The Libra star constellation includes hundreds of stars within its borders. Of those many stars, 83 of them have an apparent magnitude of 6.5. Libra’s brightest stars are used to create a quadrangle by joining the stars together with imaginary lines. This shape can be seen by stargazers without a telescope and is one of the best ways to locate Libra in the sky from the UK. Zubeneschamali is the most well-known star within Libra:

Where Is the Libra Star Constellation?

Libra is a zodiac constellation, which as the name suggests, means this constellation is situated in an area of the sky called the zodiac. But, what is the zodiac? Well, the zodiac is a region of sky where the Moon and Sun pass through.

More accurately, Libra is seen between latitudes of +65 and -90 degrees and is located in the southern sky’s third quadrant. You already know that it is close to Scorpius and was once considered part of that constellation. But it has many other neighbours too, including Virgo, Hydra and Ophiuchus.

How to See Libra from the UK

A nice clear sky and getting away from town light pollution will maximise your chances of seeing any constellation. But to see Libra in the sky from the UK, you need to know when to start looking. It is recommended to look for the Libra constellation in June at 9pm.

June is a fantastic time to go stargazing in nature because the weather has warmed up and you can make a weekend of it in a nice log cabin or tent. You could always bake some star cookies for your summer stargazing evenings too!

Remember to keep your eyes peeled for the quadrilingual of bright Libra stars to locate the constellation easily.

Distance Between Earth and the Libra Constellation

At Star Name Registry, we frequently get asked by new enthusiastic stargazers how far a constellation is from us mere Earthlings. Unfortunately, we can never answer this question. Not because we do not know the distance to the stars in the Libra star constellation, but because we do know them!

Confused? We have been able to calculate the distances from Earth to stars in Libra, but none of these stars are the same distance away. Some are closer than others, but really, they are all extremely far away. Quite a few of Libra’s stars are around 200 light years away, but one star named τ Librae is almost 450 light years away!

Even More Cool Libra Facts You Should Know!

Did we not impress you enough with all our information on the Libra star constellation? It’s a good job we kept some cool Libra facts in reserve just in case. Here are three bonus facts, but don’t tell everybody!

If you know someone who loves the stars, then why not get them a star-themed gift perfect for any occasion? You could head out camping to stargaze together – and you can make it more special by naming a star after them.Naming a star after someone you care about is a thoughtful and personal gift. Don’t miss out!