How to Find the: Gemini Constellation from the UK – and More!

The zodiac is an area of the sky where the Moon, Sun and other planets pass. It is also home to 13 wonderful star constellations, one of them being the Gemini constellation.

Should we look at the Gemini star constellation as two people, two goats or even twin peacocks? That can be debated between cultures, but what is for certain is where you can see Gemini from the UK. Learn everything you need to know about the Gemini constellation below.

The earliest record of Gemini was made by Aristotle in Meteorologica when he made reference to one of Gemini’s stars along with a sighting of Jupiter. The constellation was also part of Claudius Ptolemy’s 2nd-century account and description of 48 constellations. The exact length of time that our ancestors have known about the Gemini star constellation remains unknown, but we have been aware of it for many centuries. What is more interesting is how different cultures have interpreted the constellation and connected it to different imagery (more on this under the heading below!)

Gemini is a Latin word that means twins. In Babylonian mythology, the two brightest stars of the constellation – Castor and Pullox - are referred to as the Great Twins. Whereas in Greek mythology, the constellation is associated with two figures by the same names of the stars. Although, these two mythological figures were not twins at all. Learning the connections between constellations and mythology is one of the coolest things about stargazing. 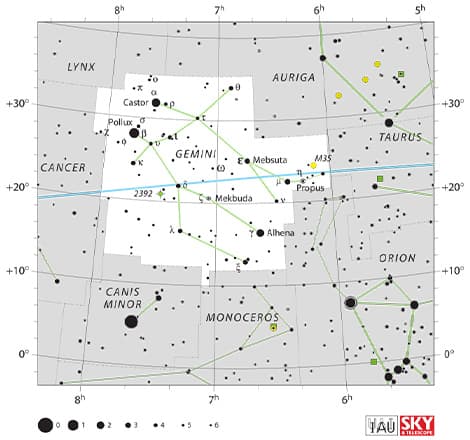 Star constellations are made by connecting the stars of the constellation with imaginary lines. Naturally, there would be more than one way to do this. The star pattern of Gemini is often drawn as two almost straight lines that are connected at the top with two shorter lines at the bottom pointing outwards. With this in mind, it is not so easy to get an image of twins from the constellation. However, with some creativity and imagination, you can see the Gemini twins as intended by many ancient peoples.

Not every culture conjures the same imagery from the Gemini constellation. Whereas in some cultures the twins are people of the Greek myths, in others they are not people at all. The Egyptians used to connect the stars to twin goats, while Arabian astrology identified them as twin peacocks.

Gemini has two famous stars, which as you now know, are called the Gemini twins. Pollux is the brighter of the two and also the 17th brightest star we can see. Other important facts about Castor include:

The other important star of the constellation is Castor, which is relatively bright as well. It is the 44th brightest star we can see from Earth. It has a magnitude of 1.58 and is a four-star system.

Where Is the Gemini Constellation?

The Gemini constellation is located between the Cancer and Taurus constellations in the Northern Hemisphere’s second quadrant (NQ2). It is seen between the latitudes of +90 and -60 degrees. If you already know where Orion is, turn your head slightly northeast of that constellation to see Gemini.

Gemini covers an area measuring 514 square degrees. By that token, it is the 30th largest constellation out of the 88 constellations recognised by the International Astronomical Union (IAU).

How to Find the Gemini Constellation from the UK?

The considerable size of this constellation combined with its two bright stars make it easier for new stargazers to see Gemini. However, it is always best to look for constellations with low levels of light pollution – and always know the right time to look for them.

The Gemini star constellation is best observed from the UK in the month of February at 9pm. If you miss your chance in February, it can also be seen in April and May after sunset by looking west. Yet, it is always recommended to look for Gemini in February.

How Far Is Gemini from Us?

A great example of this is can be found by looking at the distances of two Gemini twins themselves. Castor is approximately 51 light years away from the Sun, while Pollux is just under 34 light years away. Two other stars in the constellation, namely Alhena and Mebsuta, are over 700 light years apart from each other.

Learn Even More About the Gemini Twins

Unfortunately, being able to see the Geminids is very difficult. But you can watch a twinkle in your loved one’s eye with a cool star-themed gift. If you are stuck for a birthday or Christmas gift right now, why not name a star after someone you care about? It is all possible at Star Name Registry!