The Centaurus Constellation: Facts, Myths and Location in the Sky

There is somewhat of a mystery surrounding the Centaurus constellation. Nobody is 100% sure of the mythological figure it is said to represent.

There are so many cool mysteries about space and Centaurus is, to some extent, one of them. Learn what we do know about the Centaurus constellation in this guide – and learn where to see it from the UK!

Some suggest that the constellation is in the name of Chiron. He was a centaur that mentored Greek heroes such as Hercules and Jason. But because of Chiron's status, many others believe Chiron is symbolised within the well-known Sagittarius constellation and the Centaurs constellation must be for a less civilised centaur.

Nevertheless, the story of Chiron goes like this. King Cronus was sleeping with a nymph behind his wife’s back, but to avoid being detected, he would turn himself into a horse. As a result, the king's mistress - who went by the name of Philyra - became pregnant with a half-human and half-horse creature, namely Chiron.

Chiron became a respected figure who taught heroes about science, hunting and medicine. His father King Cronus was immortal and as his son, so was her. But Hercules accidentally hit Chiron with an arrow dipped in incurable poison. Chiron was in unimaginable pain for eternity until Zeus helped Chiron die and then placed him in the sky to become immortal in another way. 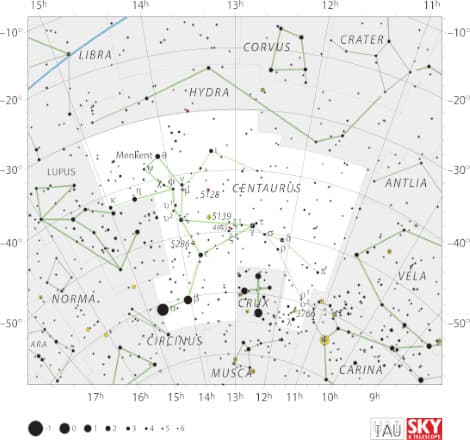 The Centaurus constellation is depicted as a centaur. As mentioned, many believe this to be Chiron while others disagree. The centaur is seen sacrificing an animal with the help of a nearby constellation, Lupus. The Lupus constellation is said to resemble a wolf and it is this wolf that the centaur is interacting with in the sky. However, if looking for Centaurus is your first time stargazing, make sure you get your expectations in check. By connecting stars with imaginary lines, we can get the outline of the centaur. But we do need to harness our imagination to bring it to life. Just think, you are looking for the same images of the sky that our ancient ancestors looked for all those years ago!

The Position of the Centaurus Star Constellation

The size of Centaurus makes it one of the top 10 largest modern constellations. It is located near other interesting star constellations, including the aforementioned Lupus, Antlia, Carina, Crux, Hydra, Musca and Jason's ship, Vela. It is also a member of the Hercules constellations.

Can I See Centaurus All Year from the UK?

No – unlike the Cepheus constellation and some others, the Centaurus constellation is not visible for the whole year in the UK. The better news is that when it is visible, its exceptionally bright stars make it easier to see, even for new stargazers.

So, when can you see Centaurus in the UK sky? The best month to search for this constellation is May. If you get some early summer weather, then looking for the centaur in the sky makes for an awesome camping trip.

Distance to the Centaurus Constellation

Earlier you learned that the brightest star in Centaurus is fewer than five light years away. Some of the other stars in the constellation are not this close. Muhlifain is over 100 light years away while another star called ν Centauri is almost 500 light years from Earth.

Whether you are revising for an astronomy competition or just want to know more, here are three bonus Centaurus facts you should know:

Just like Chiron was an awesome teacher, you can now use this information to teach others about the Centaurus star constellation. If you plan on sharing this with someone you love, why not make it even more special by naming a Centaurus star after them?

Learn how to do just that at Star Name Registry!