A Stargazers’ Guide to the Capricornus Star Constellation

What Is the Story of the Capricornus Star Constellation?

The Capricornus constellation was noted as far back as 2100 BCE and recorded by Babylonians around 1000 BCE. In the 2nd Century, a Greek astronomer called Claudius Ptolemy managed to identify 48 of the 88 constellations, and one of those constellations was Capricornus. So, it is fair to say that Capricornus is not breaking news. At one time, the December solstice would appear in the constellation, but due to changes in the Earth’s gradual changes – in this case known as axial precession – that solstice now appears in another zodiac constellation you may have heard of, Sagittarius.

Capricornus means horned goat in Latin. Despite this, the constellation is not just linked with a goat, but a type of goat-fish hybrid, otherwise known as a sea goat. The Babylonians matched the sea-goat with one of their mythological gods, Ea. This god has also been linked with imagery in other constellations from the same part of the sky, namely Aquarius. In Greek mythology, the symbolism of Capricornus is linked with a goat called Amalthea which is also referred to as a foster mother of Zeus. Furthermore, It is sometimes connected with Pan, a goat-like god that escaped a deadly creature by giving himself a fish’s tail. 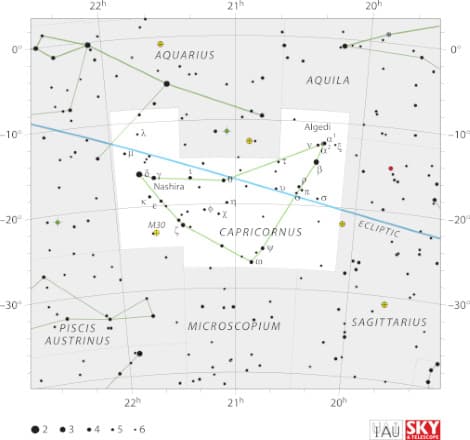 Star constellations are created by joining the stars to create a shape. It then requires a little bit of imagination on our part to transform these shapes into the images that our ancient ancestors saw. You will not see refined details when looking at star constellations with the naked eye, but that shouldn’t deter you from enjoying the stars and their beautiful history.

Ptolemy was influential in joining the stars together and he managed to create an image where the goat has a fish’s tail, hence the reference to Pan above. Yet, other visualisations have been proposed. One of which was by co-author of the Curious George children’s books, Hans Augusto Ray, whose own depiction includes no aquatic parts.

Deneb Algedi is the brightest star of Capricornus and is 8.5 times more luminous than the Earth’s Sun. However, the star’s brightness changes due to surface pulsations. Other must-know facts about this star include:

Another interesting star within Capricornus is Dabih. However, this is not just one star, but more like a series of stars together. Within Dabih is a double star system which has 40 times the luminosity of our Sun.

Where in the Sky Is the Capricornus Constellation?

This constellation stretches over 414 square degrees and sits in the Southern Hemisphere’s fourth quadrant (SQ4). It can be viewed from latitudes between +60 to -90 degrees.

When Will I See the Capricornus Constellation in the UK?

This is also how Johann Galle discovered Neptune in 1846. In September of that year, he identified Neptune, which was close to Capricornus’s brightest star. If you struggle to find Capricornus and know about the “Summer Triangle”, draw a straight line from Vega to Altair and keep going with that line to reach the Capricornus constellation. Others may like to get help from the best free apps for stargazing!

Distance to the Capricornus Constellation

Despite what our brains may trick us into thinking, the stars of Capricornus are not all the same distance from us Earthlings. Some of the stars of this constellation are by far closer than others. Some of the stars are even closer to us than each other. For example, the brightest star famous for helping us discover Neptune is just 39 light years away, while another star in the constellation named Algiedi is almost 700 light years away.

To put that into perspective, travelling one light year would take more than 37,000 years – even if we travelled at five miles per second. Now that’s really long-haul!

Need more constellation knowledge for the next game night with friends? Here are some bonus facts about the Capricornus star constellation:

You can now make looking for constellations a family occasion or romantic evening. Try naming a star after someone special and make peering at the stars even more magical!