Get Your Claws into Cancer Star Constellation Facts

Lots of new stargazers give up on finding the Cancer constellation because it’s known to not be a particularly bright constellation. However, if you live in the UK and want to see Cancer, don’t be deterred by its faint stars. With top tips and recommendations from us, you can find Cancer from the UK much easier.

The Mythology of the Cancer Star Constellation

Cancer is a word from Latin and means the crab. The crab has been identified within Greek mythology when Hercules – son of Zeus – fought against a horrendous creature with multiple heads, Hydra. The crab bit Hercules on the foot while the two fought which caused Hercules to slew it. So, how did it get a place within the stars? After all, it was usually Zeus and other gods that made creatures heroes in the night’s sky.

Well, Cancer was in fact placed in the sky by Hera, the goddess of childbirth, family, marriage and women. Hera was an enemy of Hercules, so she was the one to immortalise the crab in the sky as the Cancer star constellation. However, because the crab failed in its mission to kill Hercules, the constellation was made by Hera to be faint. For another version of this myth, remember to check out the Cancer constellation facts at the bottom of this post! 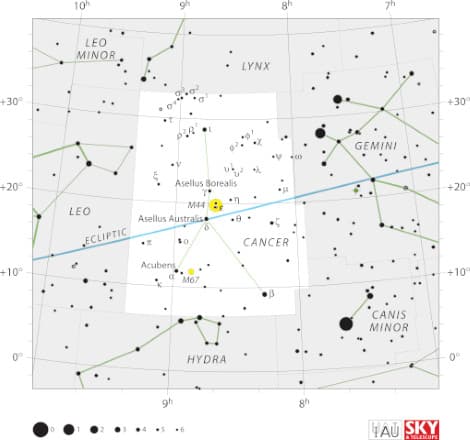 How Many Stars Are in the Cancer Constellation?

The constellation includes many stars and deep-lying objects, but it has eight major stars. The brightest of these stars is called Al Tarf and is almost 300 light years from Earth. The other major stars are called:

The constellation is also home to star clusters. One of these clusters includes more than 1000 stars. It is nicknamed The Beehive Cluster but is commonly known as Messier 44. More can be learned about this cluster below.

Where Is the Cancer Constellation?

The Cancer constellation is one of the 13 constellations found within the zodiac. For those new to stars and space, the zodiac is an area of the sky where the Earth’s Sun, Moon and neighbouring planets pass. Cancer is specifically located in the Northern Hemisphere’s second quadrant (NQ2) and covers just over 500 square degrees. Thus, it is neither a particularly small nor large constellation.

Cancer can be seen between latitudes of +90 and -60 degrees. It is surrounded by other interesting and wonderful star constellations, such as Leo, Hydra, Lynx, Gemini, Canis Minor and Leo Minor.

When Can I See the Cancer Constellation in the UK?

The best time to see Cancer from the UK is in the month of March, preferably around 9pm on a clear night with low light pollution. Due to this constellation not including any notably bright stars, it can be difficult to see unless you are outside of urban areas. The Lynx constellation is also most visible at 9pm in March and arguably a little easier to spot just north of Cancer. You may want to use Lynx to help guide you to Cancer.

But there is another reason why amateur stargazers should not give up on finding the Cancer constellation. It includes the aforementioned Messier 44, which is an open cluster – a group of thousands of stars – and one of the closest to Earth. Messier 44 remains a good target for newbies to the night’s sky.

How Far Away Is the Cancer Constellation?

It is not possible to give one answer to the distance of Cancer from Earth. The reason is because all the stars within the constellation are at different distances from us. Constellation stars may look like they are a similar distance from us when we look up from our blue planet, but they can be far apart, sometimes hundreds of light years between them.

For example, Cancer includes Acubens, Tegmine and 55 Cancri. All of these stars are not close to each other at all. They are approximately 174, 83 and 41 light years away, respectively. It would take you almost four-times as long to reach Acubens than it would to reach 55 Cancri.

Did you know there was another version of the Greek myth connected to Cancer? Find out what it is and other cool Cancer facts below:

Your special bonus fact is that you can name a Cancer star after someone special! At Star named Registry, we offer the chance to put a loved one’s name in the sky with our Star Name Registry!