Andromeda was tied to a rock and left for a sea monster to find her, all because her mother thought herself as being exceptionally beautiful. Confused? Don’t worry – we have the fascinating mythological story behind the Andromeda star constellation in this fun stargazing guide.

If you want to learn more or just when you can best see Andromeda in the sky from the UK, you are in the right place. With this guide and some of the best stargazing apps, you will be stargazing like a pro very soon!

Some constellations are complicated and become connected with wildly different mythological stories. Others, like the Andromeda constellation, are a little more straightforward. Andromeda is a well-known figure from Greek mythology. She was the daughter to Queen Cassiopeia and King Cepheus of Ethiopia.

The Queen famously offended a group of sea nymphs by claiming she was more beautiful than them, so as a consequence, the sea nymphs called on their sea god to retaliate. The sea god flooded Cepheus’s land as a result of his wife’s boastfulness. The only way for the Cepheus to make it up to the gods was to offer his daughter to the sea monsters. He chained Andromeda to a rock and left her to be found by the sea monster.

However, she was saved by Perseus before the sea monster arrived. She then married Perseus and had many children with him. It is suggested that Athena was the goddess to commemorate Andromeda by placing her in the stars alongside her mother and husband. The Andromeda constellation was recorded for the first time by Greek astronomer Claudius Ptolemy in the 2nd century 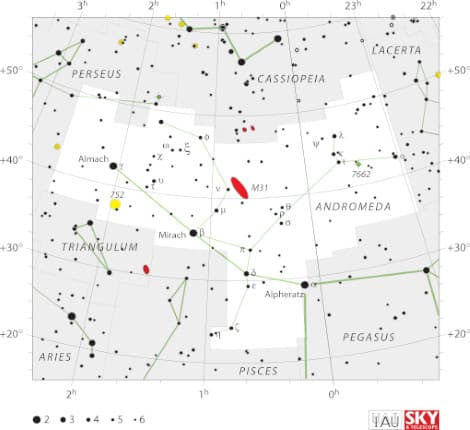 The Appearance of the Andromeda Star Constellation

It would be truly amazing if the constellations could be joined together with lines and we got a full and detailed image of the mythological figures they are said to represent. But we do have to use our imagination to make them come to life. This doesn’t make stargazing any less of an amazing activity to do with friends. Even more so now that you can name a star after a friend or family member

Ancient peoples believed the Andromeda constellation looked like Andromeda as she would have appeared when chained up. Different interpretations and star arrangements exist, but the most popular include Andromeda spreading her arms with each wrist attached to a chain

So, How Many Stars Are in Andromeda?

There are more than 15 major stars in the Andromeda constellation. This is not surprising considering depicting such a complex image would require a lot of stars and lines. The constellation’s brightest star is called Alpheratz and it is less than 100 light years from Earth, which by the usual distances of stars if fairly close. Other major stars from Andromeda include:

Where Is Andromeda in the Sky?

Andromeda is one of the biggest constellations and the 19th largest in the sky. It takes up 722 square degrees in the first quadrant of the Northern Hemisphere. It is situated near the constellation connected with her mother who offended the sea nymphs, Cassiopeia. It is also close to a unique constellation with no mythological connections, Lacerta. The closest of the zodiac constellations to Andromeda is Pisces.

You Can See Andromeda from the UK!

The Andromeda star constellation is visible for part of the year in the Northern Hemisphere, meaning UK residents are able to peer up at Andromeda chained in the sky. It can be seen at latitudes between +90 and -40 degrees.

If you want to see Andromeda from the UK, the best time to go stargazing is in November - and look for the constellations around 9pm. Make sure you look for Andromeda on a clear evening with as little light pollution as normal. This may mean getting away from built-up areas and escaping into nature. This only adds to the intimacy and romanticism of stargazing. Enjoy!

Distance Between Earth and the Andromeda Star Constellation

So, what does this tell us? Well, there is no single answer to the distance to Andromeda from Earth. All of the stars are at different distances. This can be hard to understand especially when we look at the constellation and they appear to be around the same distance away. Don’t be fooled by these wonderous constellations!

Andromeda is one of the most well-known names in mythology. She might come up on your next family quiz so smarten up with some extra facts about the Andromeda star constellation: