For us at Star Name registry, we focus on providing an excellent Star Registration service. The art of Star Registration might one expand into Planet Registration if we develop the technology to properly identify the planets that lie within the stars gravity.

But until that time, we still have a vast array of different plants from Science Fiction to keep our imaginations ticking with the different ideas of what different worlds might look like.

With any luck this might give you that little extra inspiration if you’re looking to name a star, especially if you have an unusual name in mind.

When the crew of the Nostromo detect a mysterious signal on a uncharted world and land to investigate, they end up letting on board a deadly creature that has terrorised people for generations.

The Alien from 1979’s Alien is a deeply chilling place. Never even given an official name (in the films anyway) it is known simply by a numerical designation. LV-426. With a primordial atmosphere, strong howling winds,  and shadowed landscape it was the perfect place to set up a chilling atmosphere that carries through the rest of the film.

While we don’t linger on the planet long in the first Alien film and in Aliens we see very little of the planet (as we’re cooped up indoors) what we do see leaves an uncompromising and violent feeling, much like the Alien creature itself.

14) Vogsphere – Hitchhikers Guide to the Galaxy 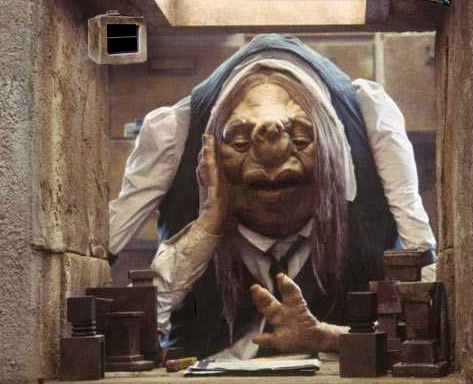 Appearing only briefly in the Hitchhikers Guide film and not overly present in the books it might be debatable whether this can be counted in the Hitchhikers canon, but nonetheless Vogsphere deserves a place on the list.  Populated by Vogons (basically an alien race of mindless bureaucrats) it is a strange wasteland where annoying spatula-shaped bugs that slap any creature in their face if they ever say anything having to do with ideas, or even thinking an original thought.

Our heroes get stuck on the planet trying to save one of their comrades from capture, but not in the traditional action movie way. They must go from an arduous task of queuing, filling out forms and dealing with uncaring office worker who feels it’s more than their job’s worth to be more helpful.

Of all the planets on this list, this one sadly reminds us too much of home at times. 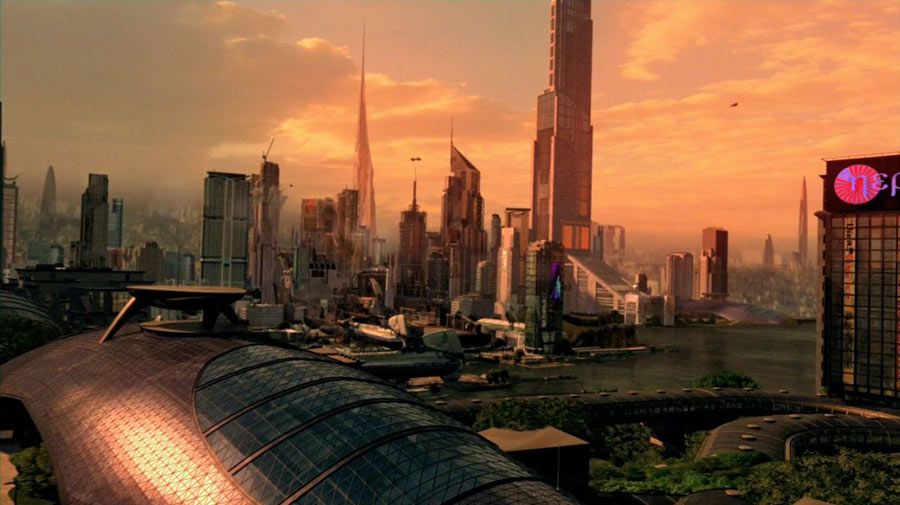 The remake of Battlestar Galactica is an interesting case in recent Science Fiction. While it has a Sci Fi setting it deliberately replicates the culture of 2000’s USA. To that end we spend a fair amount of time on the planet of Caprica, capital of the twelve colonies of Kobol.

Described as being a beautiful blue-green world with a perfect climate it also has fantastic sweeping cities with magnificent skyscrapers. It represents a planet of elites, both financial and cultural. The idea of the world was so fascinating to the writers of Battlestar, they set a spin series entirely on the world called ‘Caprica’. It’s fascination as a fictional world comes primarily though from how effectively it mirrors modern culture. 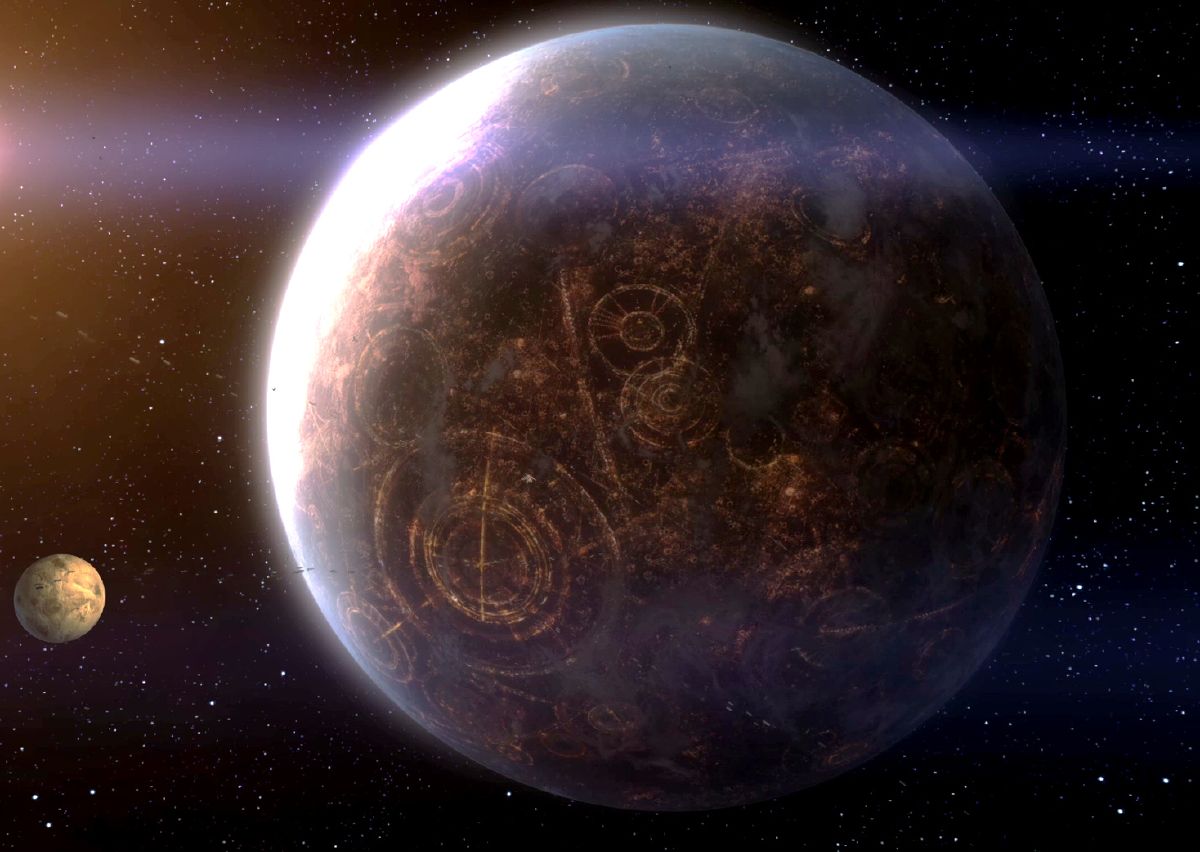 Since the first Star Wars Trilogy, George Lucas the creator was looking to show more of the galaxy when he came to make the prequels. One of the more interesting worlds we saw, was Coruscant, an Ecumenopolis (planet wide city) that served as the political, cultural, and economic center of the Star Wars Galaxy before the Empire took over. We spend a lot of time on Coruscant in the prequels and it helps give those films a focus, that is essential in it’s more politically charged plot. 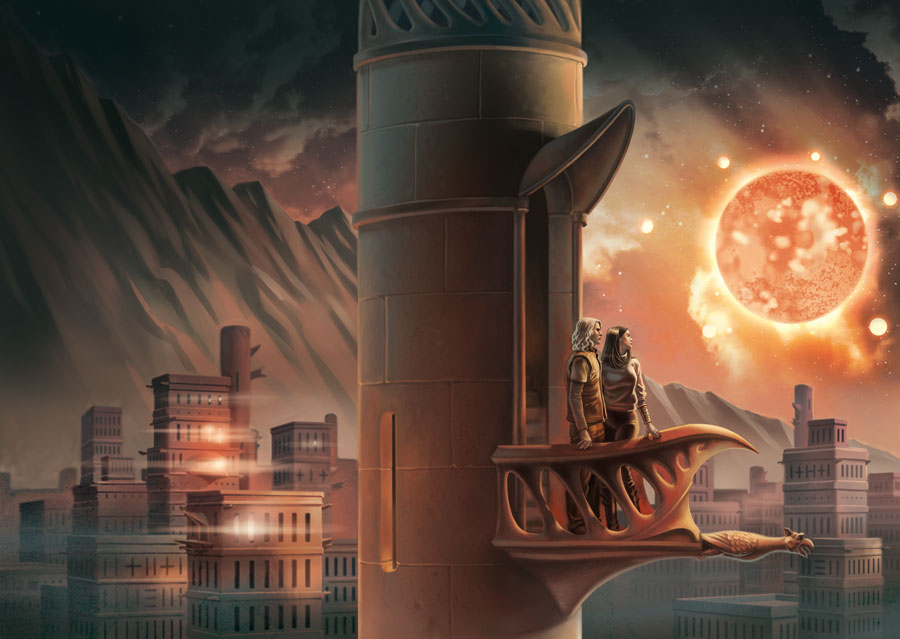 Many years before he wrote Game of Thrones, GRR Martin wrote a little-known science fiction book called ‘Dying of the Light’.  Worlorn is a world that is slowly dying. A rogue planet whose erratic course is taking it irreversibly away from its sun. Soon the planet will pass into outer space, where no life will be able to survive upon it.

Yet, it’s not just the planet that’s dying, the culture and cities of the residents are dying too. In the end we get a melancholic feel to the world of Worlorn and feel a great sadness for those who lived upon it. All set against the backdrop of a good old-fashioned romance story. 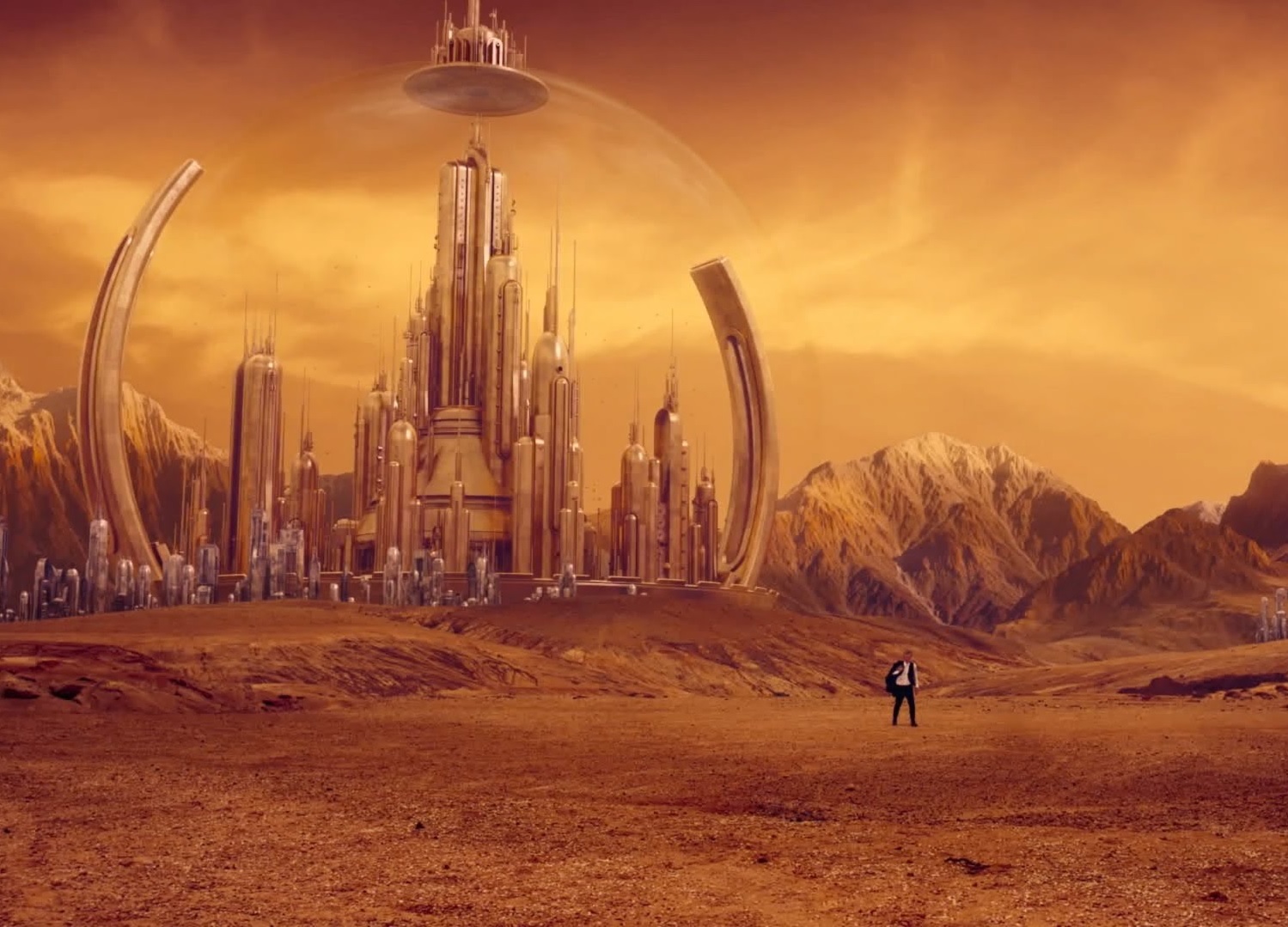 Gallifrey was a world located in the constellation of Kasterborous, and home to the Time Lords and the home planet of Doctor Who (or The Doctor). With an orange sky above, it is as beautiful as it is terrifying.

What makes the Time Lords of Gallifrey interesting as a fictional culture is that it is virtually unopposed technologically. (well until the Daleks come along in the Time War, but that’s a different story in of itself) being on top and in charge has made them arrogant, decadent, and completely removed from the universe that essentially rule over. 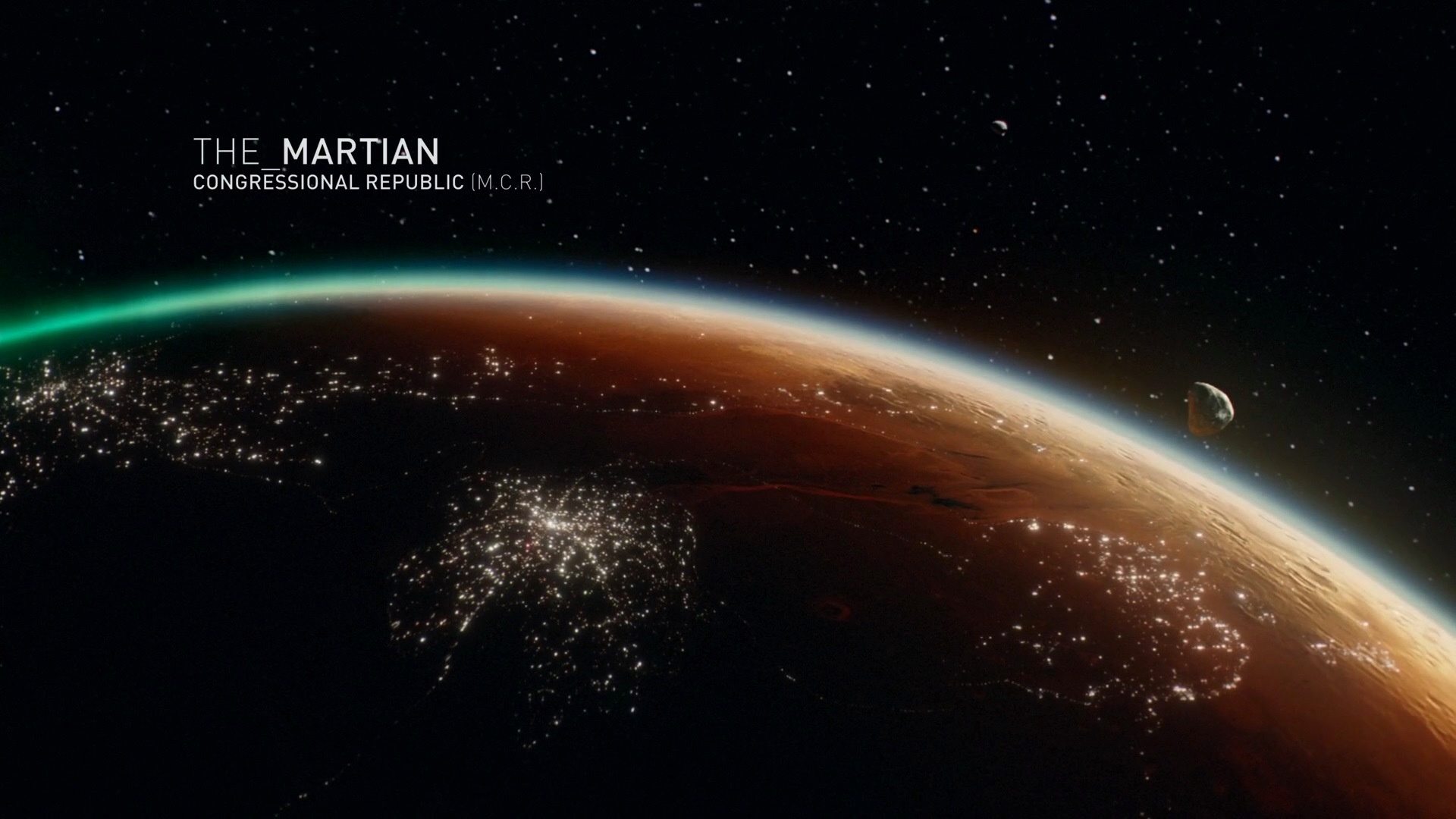 While Mars is a real planet, in the TV show expanse we see the full consequences of what would happen if a Martian colony ever went independent

In the Expanse, Mars and the Earth (The UN) are the two superpowers whose conflict drives much of the plot. Mars was originally a colony of Earth settlers, many of whom were ambitious scientists, engineers etc. While dependent on Earth for some supplies, Mars was largely self-sustaining and eventually became its own sovereign government.

The entirety of Martian society is built around working toward making the Martian atmosphere have a breathable atmosphere and protecting themselves from the UN’s influence.  It’s planet of people defined by their ambition to create a better world, and the Martians are always a pleasure to watch when they’re on screen.

It also investigates what is an inevitable consequence of any form of space colonisation, the colony wanting to become independent, similarly to how the American Colonies wanted independence from the British. It is certainly food for thought. 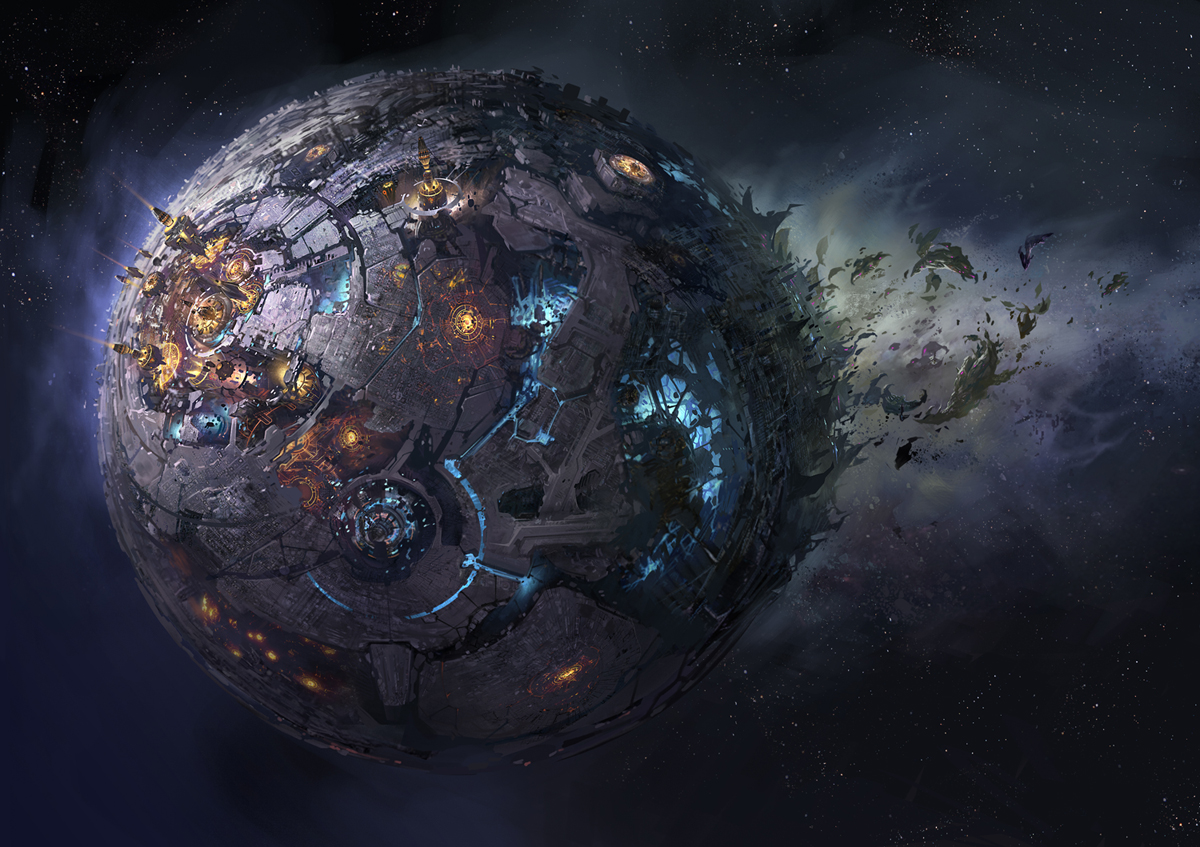 Cybertron is the home planet of the Transformers, a race of sentient robots. The world of Cybertron itself is a giant robot known as Primus.

It is a world of technology filled with towering future cities, vast metallic plains, spiralling metal mountains and bottomless neon-lit chasms. Control of Cybertron drives the main conflict between the Autobots and the Deceptacons throughout the Transformers franchise. While a lot of the details change from the different series in the Transformers franchise the core concept of Cybertron has always remained intact. 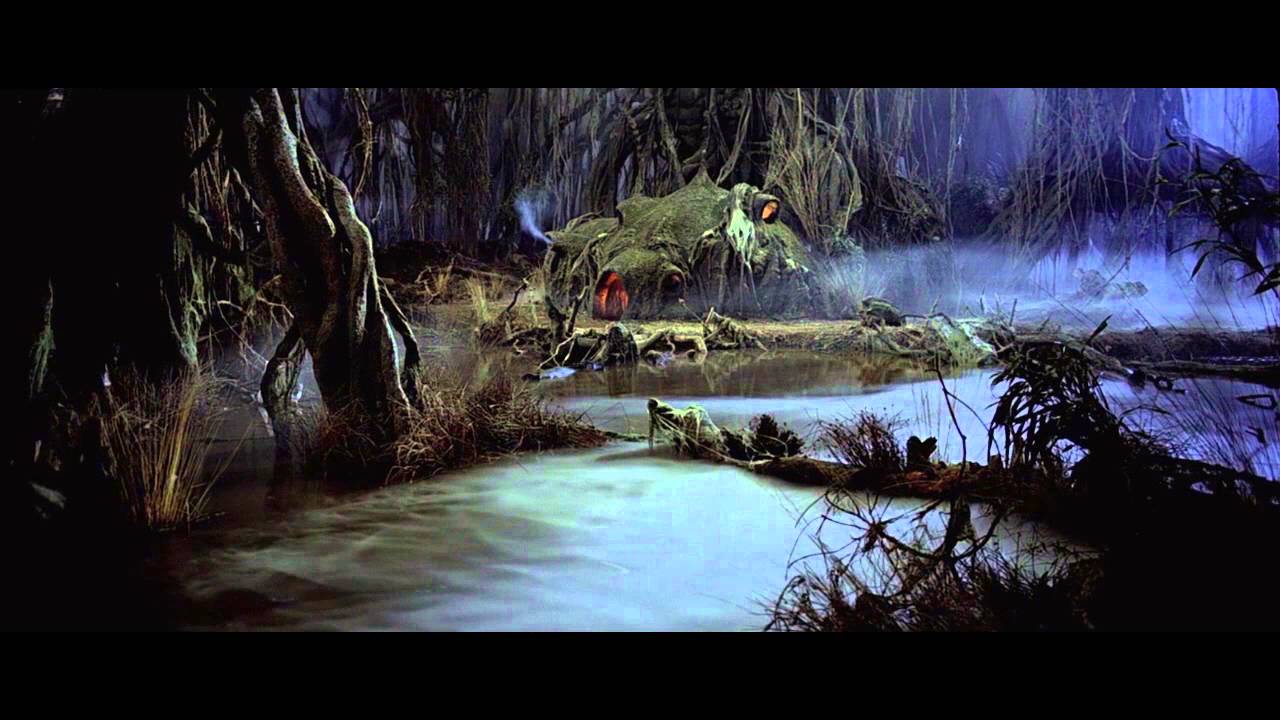 Dagobah is a mysterious, mist-shrouded world covered mostly in swamps. By all accounts not a desirable place for any sentient creature to live. Yet in the Stars Wars films, this world holds the home of greatest Jedi Master to ever live and where he would train Luke Skywalker.

Dagobah is quite the shake up from the rest of the Star Wars planets as it holds no great strategic focus for any of the wars, yet it strong with The Force, and the perfecting humbling atmosphere for Luke to hone his Jedi skills. 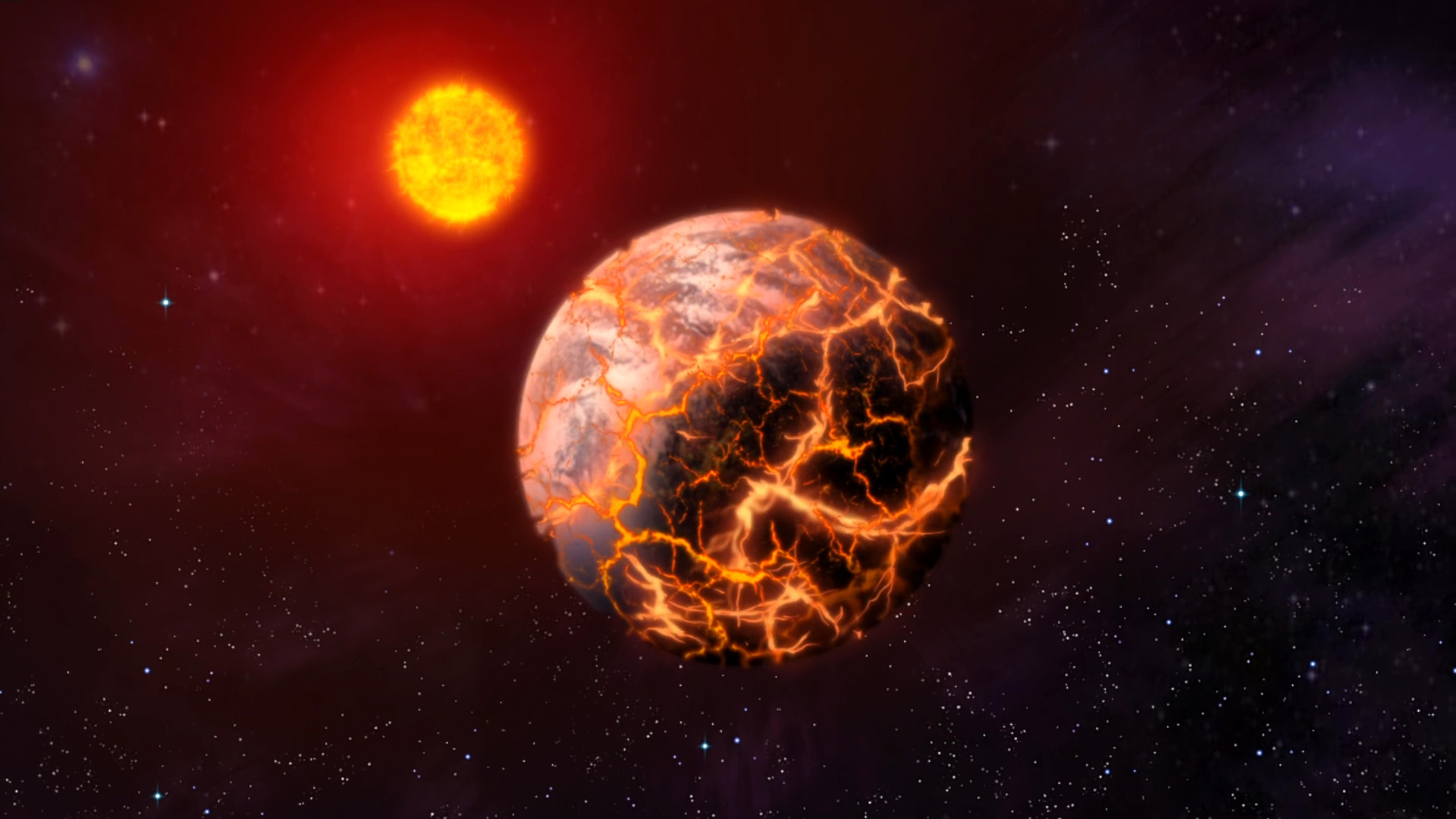 In its original conception, Superman was intended to be a metaphor for how immigrants could contribute to America and really stand out as great citizens. Yet Superman’s origins are of a long dead world called Krypton.

We see very little of Krypton in both the comics and spin offs, yet seeing Krypon is not what’s important with Krypton. It is the planets legacy and how it affects it’s last survivor Cal El, aka  Superman, in all his struggles.

5) Ego – Guardians of the Galaxy

Ego – The living Planet – yup we’ve got to the level of planets thank think for themselves, though Ego won’t be the last sentient plant on this

Ego is an extremely powerful being, almost godlike in his abilities to influence matter around it, Ego is quite a formidable opponent in the second Guardians of the Galaxy film.

While Ego is a powerful creature, his well ego, matches his planetary stature and in both comics and the film he has extreme superiority complex and is deeply distressed if he is thwarted. 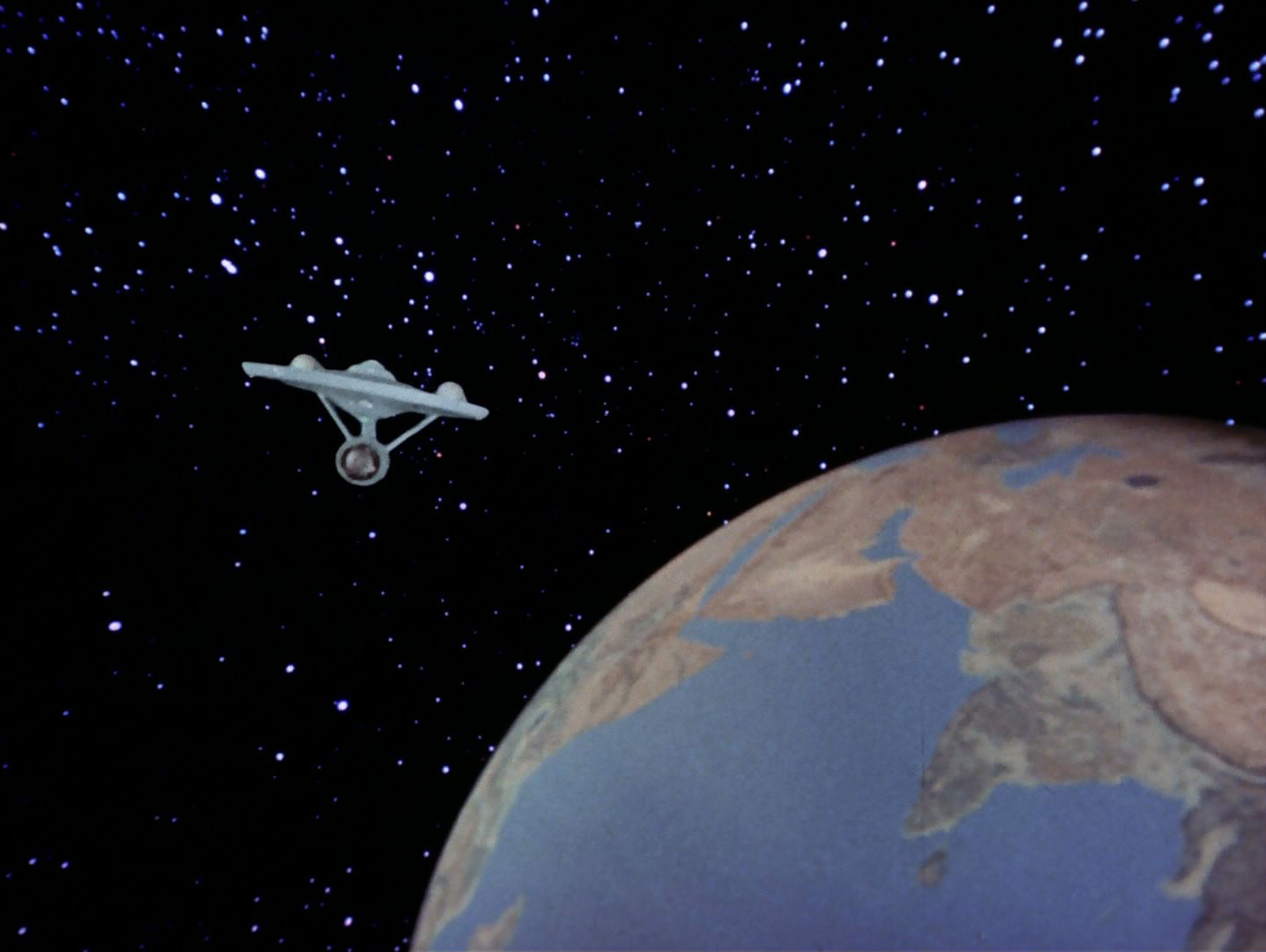 While Earth is by no means a fictional place, the version of Earth we see in Star Trek is, so we’re including it here.

In the Star Trek universe, Earth is a centre of both Social and Technological progress. It is a world where technology is so efficient it caters to everyone’s needs, and where nobody is judged by their ethnicity, sexuality or religious beliefs.

It presents an optimistic vision of what Humanity could turn Earth into and while it remains a fiction for now there is some hope that this is not beyond our ability to achieve. 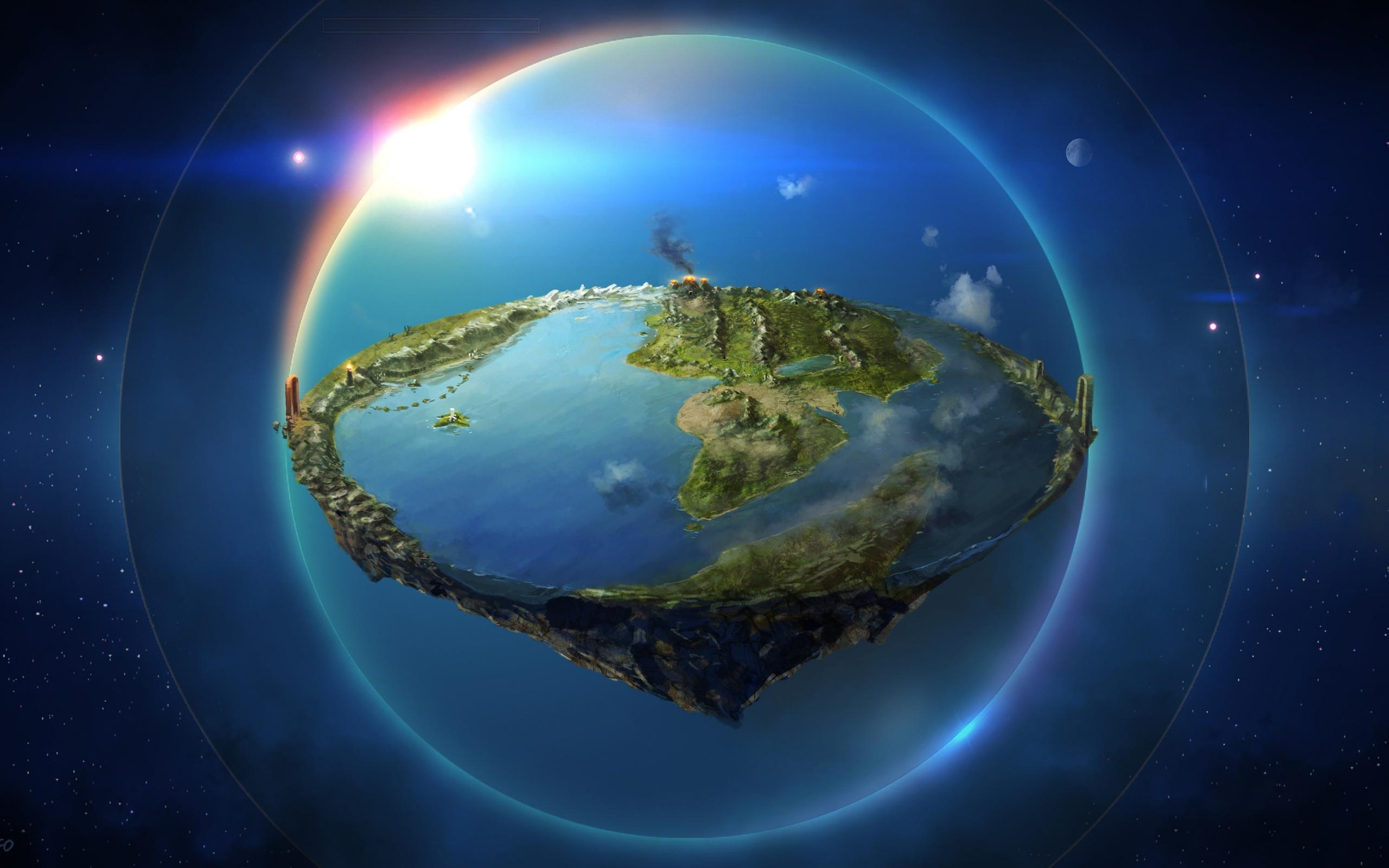 For those of you not overwhelmingly familiar with Lord of the Rings Lore, it might come as a surprise that the world of Lord of Rings actually takes place on a planet called Arda, of which Middle Earth is just a small part.

While not strictly science fiction, so many elements of Tolkien’s Legendarium continue to percolate through other forms of speculative fiction that we thought Arda was a worthy addition to this list.

The original desert planet. While most people are more familiar with Tatooine from Star Wars as the desert planet of Science Fiction, Arakis, or as it’s more commonly known Dune did it first.

A desert planet with no natural precipitation, it has only one resource, but that resource is essential for the rest of the cosmos in which Dune resides; Melange (or, “the spice”) It has two functions that make it so invaluable – it extends life and makes safe interstellar travel possible. As a result, Dune becomes a focal point for all the actions of the (very unusual) plot of Dune takes place.

While Dune the Book is considered a masterpiece of modern Science Fiction, David Lynch’s Film version is much more divisive. But both versions capture the strange wonder such a vast planet might inspire.

A common motif in Science Fiction is that when man ventures out into space, what he really discovers is not the universe, but the very nature of himself. This is where the planet Solaris comes in. An uninhabited and inhospitable world, Solaris is covered by a single massive ocean, though the liquid that constitutes it remains a mystery to scientists.

After its initial discovery those very scientists in question begin to observe unusual movements and formations in the ocean, but they also observe strange behaviour in each other. The ocean, and the planet Solaris itself as it turns is not just a body of water, but something more disturbing to the human mind. Solaris is a living planet, reacts and reflects to the psychological trauma to any who encounter it over an extended period. Exposing the innermost of your inner space:

We won’t go into how this happens in both the book and film, but they are both worth checking out, to get a feel for why Solaris, is the best planet to ever appear in Science Fiction.

Did you like this coundown list? Have any of the names here inspired an idea for your Name A Star gist?  Let us know on our Facebook page or Twitter feed! Or if you can convey your feelings with a photo, send us a pic on Instagram!