Now is the last chance for a while to see the five planets of Mercury, Venus, Mars, Jupiter and Saturn align! The last time this event occurred was over a decade ago and took place between December 15th 2004 and January 15th 2005. The next time will be August latter this year but it will be considerably more difficult to see in the summer sky.

The planets will be visible to the naked eye up until the 20th February and appear in an arc across the sky. The optimal time to view this alignment is just before dawn (approximately 6:30am). The easier way to find them is to first find the planet Venus, as this is the brightest of the set, before looking for the other four.

Dr. Robert Massey of the Royal Astronomical Society says that with binoculars you “will be able to see Jupiter’s moons and the red tinge of Mars. You probably won’t be able to see Saturn’s rings but it will have a funny shape because of the rings which you should be able to pick out”.

It really is a spectacular sight! We wish you luck if you decide to brave the early morning to catch a glimpse, though its important to be cautious when using binoculars and not look towards the rising sun. 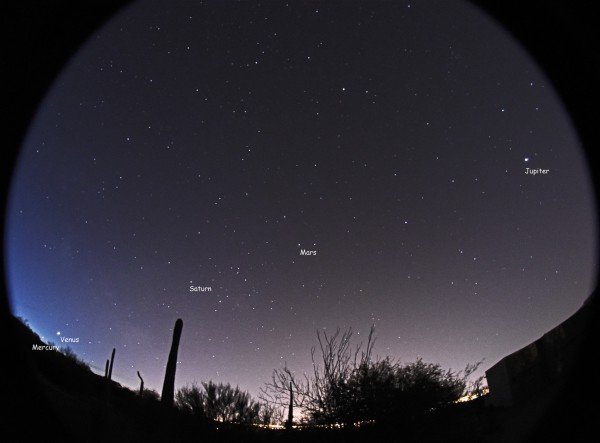