A massive cloud of hydrogen gas 11,000 light years long and 2,5000 light years across with over one million solar masses is hurtling at a speed of 700,000 miles per hour towards our Galaxy.

This is Smith’s Cloud. It was first discovered in 1963 by then astronomy student Gail Smith at Leiden University in the Netherlands.  Its composition and origin was left unproven and one of the leading theories was that it originated from some intergalactic source.

However recently Dr Nicholas Lehner working with his team from the University of Notre Dame, Indiana have determined, by looking at its composition, that it originated from the outer edges of the Milky Way. Using observations from the Hubble space telescope it has been discovered that the cloud was ejected from the milky way approximately 70 million years ago and has since started to boomerang back. Lehner and his team discovered this when they noticed that the cloud was particularly rich in sulphur and had a similar amount as the milky way’s outer disk.

Smith’s Cloud is expected to merge with the Perseus arm of the galaxy in approximately 30 million years time. The resulting collision will cause a burst of new star formation and the hydrogen contained in Smith’s cloud will be enough to cause the creation of over two million new stars.

One of Lehner’s co-authors Dr Andrew Fox of the Space Telescope Science Institute, Baltimore says that it is “an example of how the galaxy is changing with time” and that “It’s telling us that the Milky way is a bubbling active place where gas can be thrown out of one part of the disk and the return back down into another”.

There are still many questions that remain unanswered however. It still remains unknown, for instance, what sort of cataclysmic event could have caused this event to occur. 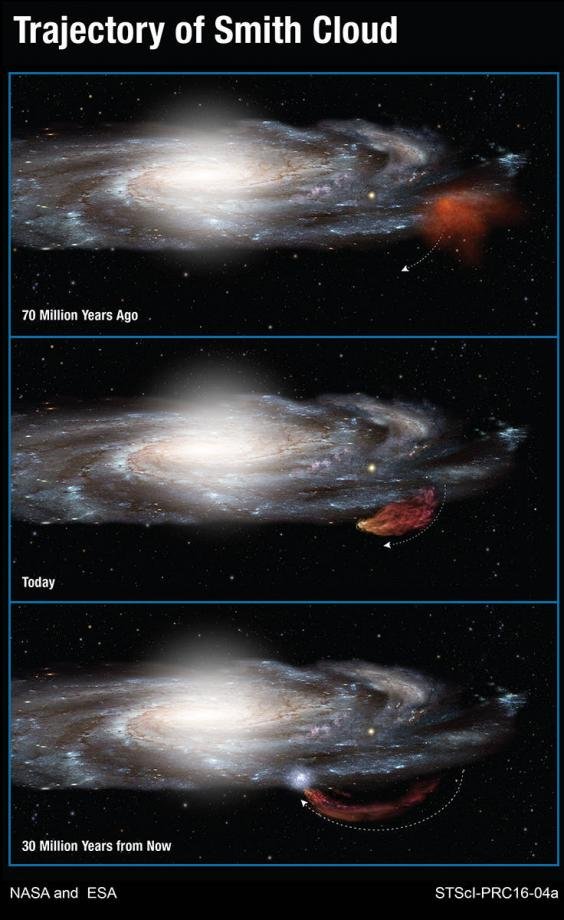